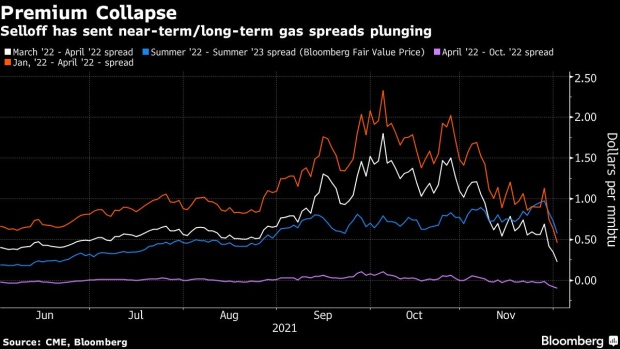 (Bloomberg) -- Bullish bets on U.S. natural gas are collapsing as mild weather erodes the outlook for heating demand and eases fears of shortages this winter.

The popular “widowmaker” spread between March and April futures -- essentially a bet on how tight inventories will be at the end of the northern hemisphere’s winter -- shrank to 22 cents after surging to $1.90 per million British thermal units in early October.

The gas rally that ended last month saw traders adding a sizable premium to next year’s summer contracts over 2023 deliveries for the season. That has also been slashed over the past few sessions as traders reassess the outlook for supply and demand.

“It looks like at this time we’re going to have plenty of surplus going into winter and even coming into spring,” said Dennis Kissler, senior vice president at Bok Financial Securities.

Gas stockpiles in the U.S. are near normal for this time of year, even as exports of the fuel soar to a record and shale drillers heed investor demands to rein in spending and curb production. That’s in stark contrast to gas markets in Europe and Asia, where prices have surged amid concern about severe shortages this winter.

Gas for January delivery settled down 6.8% at $4.258 per mmbtu on the New York Mercantile Exchange, the lowest since Aug. 26. Prices have slumped nearly 22% this week alone.