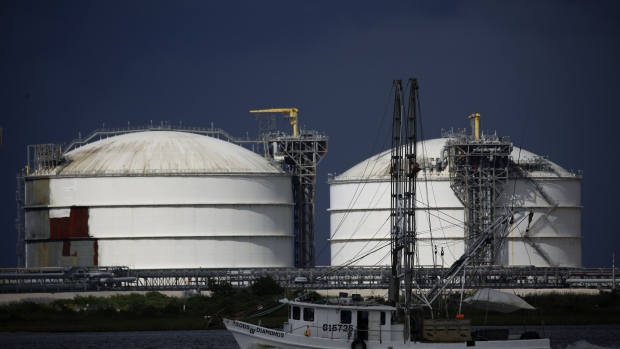 A shrimp boat moves past storage tanks at the Sabine Pass LNG Export Terminal ahead of Hurricane Laura in Sabine Pass, Texas, U.S., on Tuesday, Aug. 25, 2020. Hurricane Laura is poised to become a roof-ripping Category 3 storm when it comes ashore along the Texas-Louisiana coast, threatening to inflict as much as $12 billion of damage on the region and potentially shutting 12% of U.S. refining capacity for months. Photographer: Luke Sharrett/Bloomberg , Bloomberg

(Bloomberg) -- Naturgy Energy Group SA is weighing a sale of its liquefied natural gas unit, according to people familiar with the matter.

The Spanish energy company has been approaching potential suitors, including industry peer Repsol SA, about a deal for the LNG assets since the first half of the year, the people said.

Interest from Repsol and others has so far been lukewarm amid slumping oil and gas prices, the people said, asking not to be identified as the talks aren’t public.

The LNG market has been badly impacted by the coronavirus crisis, with declining demand seen possibly extending into 2021. A slew of once-promising export projects are struggling to find financing, threatening a worse supply glut over the next decade.

Naturgy Chief Executive Officer Francisco Reynes is under pressure from shareholders to deliver returns, according to the people. The company, whose major investors include Criteria Caixa SA, Global Infrastructure Partners and CVC Capital Partners, has seen its shares fall 22% this year, compared with a decline of around 2.2% in the Stoxx 600 Utilities Index.

Since joining as CEO in February 2018, Reynes has changed the company’s name and sought to focus on fewer markets and cost savings. Under a current plan, the company is targeting a net profit of 1.8 billion euros ($2.1 billion) by 2022. Reynes is due to update investors on the next stages of the company’s transformation later this year.

Naturgy distributes gas and electricity to 18 million customers and operates in 28 countries, according to its website. It is also an electricity generator through operations in countries including Australia, Brazil and Mexico.