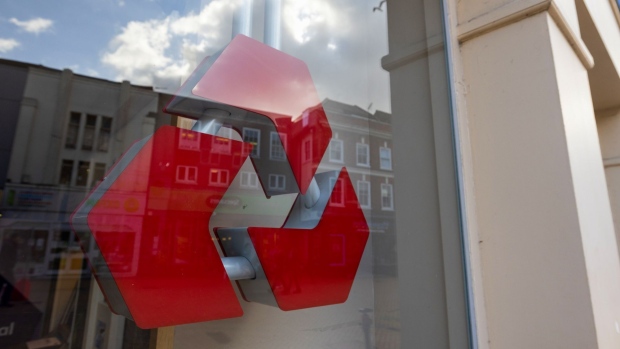 A sign in the window of a NatWest Group Plc bank branch in Chelmsford, U.K., on Friday, Feb. 11, 2022. European banks have largely thrived in the pandemic thanks to a flurry of dealmaking and unprecedented taxpayer support for the economy. Photographer: Chris Ratcliffe/Bloomberg , Bloomberg

NatWest Group Plc is considering launching a separate digital lender for small businesses in the UK to find a new avenue of growth for the bank.

The plan would bring NatWest together with Brussels-based Aion through a new joint venture, according to people familiar with the matter, who asked not to be named because the negotiations are private.

Aion has a banking license and already operates in several countries including Belgium and Poland. A deal would also involve its technology provider, Vodeno, whose data capabilities could help NatWest attract smaller business customers that traditional banks would normally consider uneconomic. Both are owned by US private equity firm Warburg Pincus.

The UK lender could also explore using the pair’s technology to offer financing to customers shopping at retailers, via what is known as “banking as a service.”

NatWest’s venture would add to its already dominant presence in UK business banking, where it has about one million customers, or one in four companies.

The plan has won tentative backing from senior individuals within NatWest but is still at an early stage of development, according to the people. If it goes ahead, both NatWest and Warburg Pincus could inject capital into the joint venture to fund Aion’s expansion into the UK.

NatWest is hunting for growth opportunities after more than a decade under the control of the UK government, which cut its stake to 48% in March. Alison Rose, NatWest’s chief executive officer, bought a book of mortgages from Metro Bank in a £3.1 billion deal in 2020 and last year added RoosterMoney, an app aimed at helping children manage their cash.

The Edinburgh-based bank has also held talks with the private equity owners of consumer credit business NewDay, whose initial public offering was postponed during market volatility earlier this year, according to one person familiar with the matter, who asked not to be named discussing non-public information.

NatWest declined to comment on Aion or any other potential transaction. Spokespeople for Warburg Pincus and Aion also did not comment.

Executives believe that while small, Aion offers a technology platform that could make it cheaper to reach new customers and to offer more services such as accounting, according to one person familiar with the matter. Any lessons could be brought back into NatWest’s main SME operation.

NatWest has already made several attempts to harness fintech, the catch-all term for banking services underpinned by online platforms instead of brick-and-mortar branches. It launched Bo, a digital retail lender, in 2019 but closed it six months later and folded the business into Mettle, which was established to serve SMEs. Mettle’s chief executive, Marieke Flament, departed in December. She has been replaced by Andrew Ellis, who is also NatWest’s head of digital assets.

Big banks are spending billions on both system upgrades and dealmaking in the search for technological advantages. Lloyds Banking Group Plc and JPMorgan Chase & Co. considered buying UK digital lender Starling Bank Ltd. in 2020, the Times reported at the time. JPMorgan went on to buy wealth manager Nutmeg, and launched a British retail bank under the Chase brand last year. Others such as Spain’s Banco Bilbao Vizcaya Argentaria SA are competing with fintechs to develop banking as a service offerings.

NatWest has already struck technology collaboration deals in other areas, including with fintech Pollinate to offer merchant acquiring payments services to small business customers on a platform called Tyl.