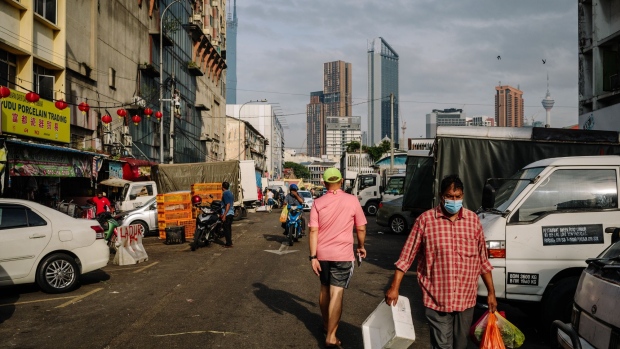 Shoppers outside a market in Kuala Lumpur, Malaysia, on Wednesday, Feb. 9, 2022. Malaysia’s economy likely emerged from recession with a 5.6% year-on-year rebound in 4Q, following a contraction of 4.5% in the previous quarter, according to Bloomberg Economics’ estimates. Photographer: Ian Teh/Bloomberg , Bloomberg

(Bloomberg) -- Asian buyout firm Navis Capital Partners has selected Rothschild & Co. to help with a potential sale of its premium supermarket chains in Malaysia, which could be worth more 1 billion ringgit ($235 million), according to people with knowledge of the matter.

The Kuala Lumpur-based private equity firm and its financial adviser are preparing to start a sale process to gauge prospective investors’ interest in The Food Purveyor Sdn., said the people. Other companies in the industry and private equity firms have expressed interest, one of the people said, asking not to be identified as the process is private.

Navis asked last year for proposals from banks for a sale of the company, which owns the Village Grocer and Ben’s Independent Grocer supermarkets, Bloomberg News reported. The buyout firm bought a majority stake in The Food Purveyor, then known as Village Grocer Holdings Sdn., in 2014, according to the company’s website.

Discussions are ongoing and Navis could decide not to proceed with a transaction, the people said. Representatives for Rothschild and Navis declined to comment.

Online shopping accounted for just 2% of total grocery gross merchandise value in Southeast Asia in the first half of 2021, according to a report by Google, Bain & Co. and Temasek Holdings Pte’s e-Conomy SEA research project. That figure could grow to $50 billion if it reaches the 10% penetration seen in markets such as the U.S. and China, the report showed.

The Food Purveyor operates supermarket brands including Pasaraya OTK and manages about 31 stores in Malaysia, its website shows.