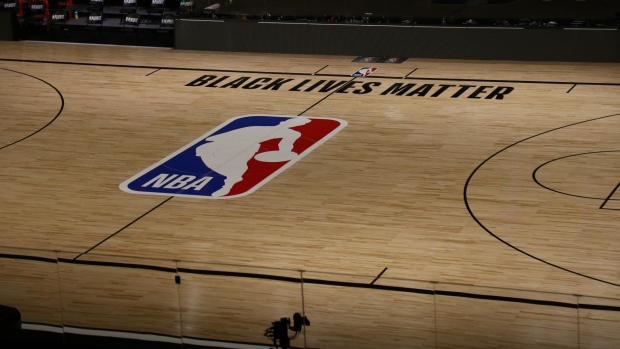 LAKE BUENA VISTA, FLORIDA - AUGUST 26: A general view of the court after the postponed game five of the first round of the NBA Playoffs between the Oklahoma City Thunder and the Houston Rockets at The Field House at ESPN Wide World Of Sports Complex on August 26, 2020 in Lake Buena Vista, Florida. , Photographer: Pool/Getty Images North America

The thing I most admire about the decision by NBA players to boycott games this week was the way they went about it. It was thoughtful, it was meaningful, and it was purposeful.

The boycotts came about late Wednesday afternoon. Three days earlier, a White police officer in Kenosha, Wisconsin, shot a 29-year-old Black man, Jacob Blake, in the back seven times. Blake was in the hospital, paralyzed from the waist down. The shooting had been captured on a horrifying video, just like George Floyd’s death in May, which revived the #BlackLivesMatter movement.

No group of athletes had been more cognizant of #BlackLivesMatter than the players who make up the National Basketball Association, a league that is 75 per cent African-American. Because of the pandemic, the NBA had been shut down since mid-March. When the games restarted in the Walt Disney World “bubble” in Orlando, Florida, at the end of July, the words “Black Lives Matter” were painted prominently on the court. The players put messages on the back of their jerseys, including “I Can’t Breathe,” “Equality” and “Justice” in addition to “Black Lives Matter.” (The women in the WNBA did the same.)

Indeed, many NBA players had agonized about whether to restart the season at all, fearing that the entertainment they would provide would take attention away from the issues of racial justice that were suddenly front and center. By making #BlackLivesMatter such an important focus of the restart, they felt they would be doing their part to keep people thinking about racism in America.

The shooting of Blake, with its painful suggestion that nothing had changed since Floyd’s death, was thus a devastating blow. “It’s amazing to me that we keep loving this country and this country does not love us back,” said a tearful Doc Rivers, the coach of the Los Angeles Clippers. Dozens of other players and coaches offered similar sentiments.

Kenosha is less than an hour’s drive from Milwaukee. The Milwaukee Bucks — one of the best teams in the league, with a good chance of winning the NBA title — felt the need to make a statement that went beyond messages on jerseys. Their plan was to refuse to play Wednesday’s game, and thus forfeit to their opponents, the Orlando Magic.

Instead, the Magic decided not to play in solidarity with the Bucks. And then the other four teams scheduled to play Wednesday opted not to play as well, and the boycotts quickly cascaded to the WNBA, Major League Baseball and professional soccer. Meanwhile, in their locker room, the agitated Bucks got on a Zoom call with Wisconsin’s attorney general, Josh Kaul, and Lieutenant Governor Mandela Barnes.

“They just wanted to know what they could do,” Barnes later told ESPN. “They wanted something tangible they could do in the short and long term. They wanted the walkout to be Step 1.” He suggested they call on the legislature to pass a police reform bill that Wisconsin’s governor, Tony Evers, had proposed. When the team emerged from the locker room, that’s exactly what it did.

On Wednesday night, players and coaches from all 13 teams in the Disney World bubble held a long meeting. ESPN would later describe it as emotional and chaotic, and no doubt it was.

But it also sounded inspiring. The players asked one another: what more could they do to confront injustice? What kind of an agenda should they have? How could they make the most of the platform their athletic talent gave them?

Andre Iguodala of the Miami Heat talked about the importance of political action to achieve lasting change. “Your talent is your power,” Rivers said. According to ESPN, Rivers told the players they should try “to come away from the meeting with three clear items the league can help them act upon, things like police reform and accountability or voter registration and support.”

After continuing the boycott Thursday night, the players are expected to resume the playoffs either Friday or Saturday. (There was some talk of walking away from the rest of the season, but it was abandoned quickly.) And critics will no doubt question what, if anything, the players accomplished. But this was their way of protesting what happened in Kenosha on Sunday and of keeping the country’s focus on the shooting. They showed they are not willing to stand by silently with the nation in turmoil. And they showed they would continue to use their platform to protest injustice and call for police reform. One tangible outcome: More Than a Vote, a group headed by LeBron James to fight voter suppression, announced that it would spend millions of dollars on a new initiative to increase the number of poll workers in predominantly Black districts.

For decades, you could count on two hands the number of athletes who took political stands: Bill Russell, Jim Brown, Kareem Abdul-Jabbar, Muhammad Ali and a few others. Mostly, athletes preferred not to get involved — most famously Michael Jordan, who declined to endorse Harvey Gantt in his 1990 North Carolina Senate race against Jesse Helms.

Then, four years ago, during a preseason NFL game, Colin Kaepernick kneeled during the national anthem. He later explained that he did so to protest police brutality against African-Americans and other people of color. His stance cost him his livelihood — after that season, he never played another down in the NFL — but it sparked a movement.

Today, players in virtually all sports — but especially basketball — are unafraid to speak out, to protest, to “take a knee” during the national anthem. I know people who fervently wish that sports could remain separated from the problem the country faces. But those days are over.