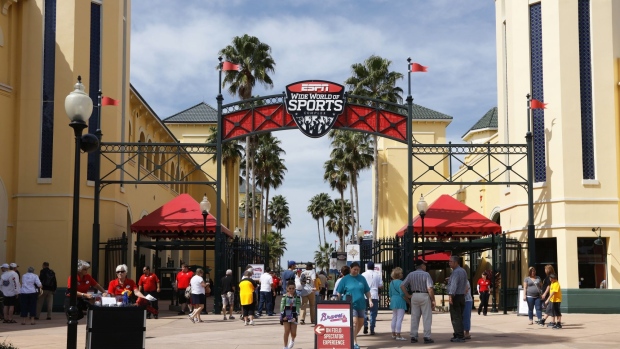 LAKE BUENA VISTA, FL - MARCH 5: General view of the exterior of the ballpark as fans make their way into the ESPN Wide World of Sports Complex prior to a spring training game between the Pittsburgh Pirates and Atlanta Braves at Champion Stadium on March 5, 2016 in Lake Buena Vista, Florida. The Pirates defeated the Braves 9-6. (Photo by Joe Robbins/Getty Images) , Photographer: Joe Robbins/Getty Images North America

The Walt Disney Co.-owned center, which opened in 1997, includes baseball diamonds, a basketball arena, field house and a running track.

And if all goes well, it might be the scene of the rebirth of live sports in the U.S. this summer.

On Thursday, the National Basketball Association approved a restart to its season that will likely involve playing its remaining games at the complex beginning July 31. Major League Soccer also may play in the facility.

And the state is courting Major League Baseball, much as it did a return for golf, Florida Governor Ron DeSantis said at a press conference in Orlando on Wednesday.

“People are hungry for this,” the governor said. “Orlando really can be the epicenter for the comeback of professional sports.”

The return could also be a much-needed shot in the arm for Disney, which has seen its businesses pummeled by the coronavirus shutdown. Its U.S. theme parks have been shuttered since March.

Theaters aren’t open to show its films, and TV production is on hold. With no live sports, its ESPN channels have seen their viewership plunge.

“You will have the most remarkable collection of sports being played at one time in the history of television.”

But it could be an entirely different scene with world-famous athletes potentially staying in Disney hotels for weeks.

With the players posting on social media, and the networks using establishing shots and more frequent interviews on the air, the return of sports to the ESPN complex could become a huge commercial for Disney.

TV came in a close second. Disney’s four big theme parks and 18 hotels in Orlando will begin reopening in mid-July, and the ESPN complex is just minutes away.

“Disney needs it right now,” said Dennis Speigel, a theme-park consultant in Cincinnati. “It gives them something positive to wave around. It touches all the Disney elements, from broadcasting through resorts. It’s a big economic multiplier.”

Disney and AT&T Inc.’s Turner division, which shares broadcast rights to NBA games, will soon begin discussing schedules with the league. The NBA could produce a $1 billion advertising windfall for the networks, which saw ad sales fall some 30 per cent in April without sports, according to Bloomberg Intelligence estimates.

But there are pitfalls. The restart of the NBA, as well as hockey, baseball and football, could be a scheduling nightmare for the networks in the fall.

ViacomCBS Inc. is already skipping a Sunday National Football League game in mid-November so it can show golf’s Masters tournament, which was moved from April.

The media giants have expanded their channel lineups over the years, with Disney potentially running games on ESPN News as well as its ESPN+ streaming service.

Fox Corp. — which operates the Fox Sports 1 and Fox Sports 2 cable channels, as well as its namesake broadcast network — could even use Fox Business for live sports.

After months with no live events, many in the industry see the scheduling issue as a problem they’re happy to have.

“You will have the most remarkable collection of sports being played at one time in the history of television,” said Lee Berke, a sports industry consultant.

For viewers, interest may also lie in how the networks present games without live fans in the audience.

ESPN has been running KBO baseball games from South Korea on its channels with fake crowd noise, as has Fox with its German Bundesliga soccer matches.

ESPN has also been experimenting with putting microphones on athletes during baseball’s spring training, something that could be extended into regular seasons and other sports.

To some degree, the network is drawing on its experiences broadcasting events such as the NFL draft and the Ultimate Fighting Championship without fans, according to Connor Schell, the network’s content chief.

“We’re thinking about new camera presentations and angles,” he said during an online press event last week. “How we can use audio to capture natural sound in really interesting ways and really provide access that brings fans closer to the action.”