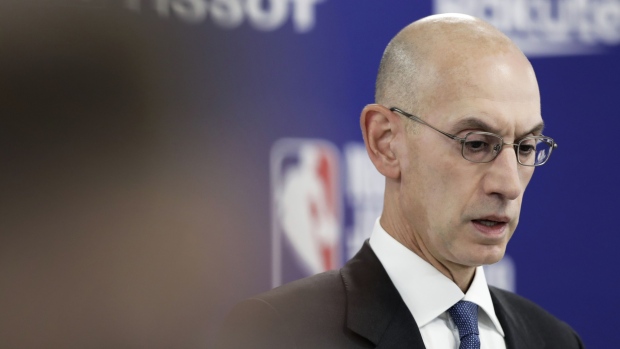 Adam Silver, commissioner of the National Basketball Association (NBA), attends a news conference prior to the NBA Japan Games 2019 between the Houston Rockets and the Toronto Raptors in Saitama, Japan, Oct. 8, 2019. Bloomberg/Kiyoshi Ota

“The financial consequences may go on and be fairly dramatic,” Commissioner Adam Silver said Thursday at the Time 100 Health Summit in New York. But the league is willing to take on the costs to support free expression, he said.

The NBA was plunged into turmoil earlier this month after the Rockets’ Daryl Morey posted the tweet in support of pro-democracy demonstrators in Hong Kong. He soon deleted the message, but China took umbrage and the NBA’s sponsors in the country cut ties with the league. Silver further inflamed tensions at the time by supporting Morey’s right to free speech, telling reporters that the league wouldn’t police what people can say.

It all happened on the eve of two NBA preseason games that were played in China. Though they went ahead as planned, the local broadcasts were canceled in China and partners pulled out.

One of the biggest lingering questions was how severe the financial fallout would be. The NBA is the most popular U.S. league in the world’s most populous country — with some 800 million Chinese fans — and its business there is already a billion-dollar enterprise.

As of right now, NBA games aren’t back on the air in China, Silver said at the conference, where he mostly spoke about mental health.

He added that Chinese interests asked for Morey to be fired for the tweet.

Silver drew criticism for the NBA’s initial reaction to Morey’s tweet. The league defended Morey’s right to give his opinion, but said it regretted that his tweet was received so negatively by the league’s fans in China. That led many in America, including prominent politicians on both sides of the aisle, to accuse Silver and the league of bowing to the interests of a foreign government.

“On one hand, we’re supporting free expression, but again, maybe I was trying too hard to be a diplomat,” Silver, 57, said Thursday.

The NBA has spent decades cultivating its business in China. It was the first U.S. league to broadcast games in China, the first to open an office in China and the first play games there. It launched NBA China in 2008 to spearhead business in its biggest growth area.

“I felt that we had made enormous progress in terms of building cultural exchanges with the Chinese people,” Silver said. “I have regret that much of that was lost, and I’m not even sure where we’ll go from here.”