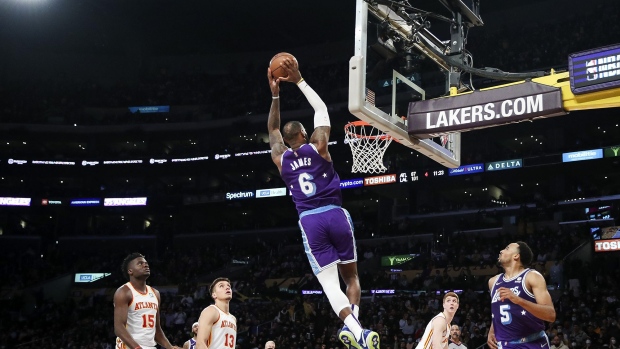 LeBron James of the Los Angeles Lakers dunks against the Atlanta Hawks in the second half at Crypto.com Arena in Los Angeles, in Jan. 2022. , Photographer: Meg Oliphant/Getty Images

(Bloomberg) -- The National Basketball Association said it won’t schedule any games on Tuesday, Nov. 8, to encourage voter participation during the 2022 midterm elections.

The league made the announcement ahead of premiering its 2022-2023 schedule on Wednesday. Individual teams will highlight local processes and deadlines at upcoming games, including sharing voting resources at those played on Nov. 7, the NBA said.

“The scheduling decision came out of the NBA family’s focus on promoting nonpartisan civic engagement and encouraging fans to make a plan to vote during midterm elections,” a spokesperson said.

The move comes after years of work to increase voter turnout by the NBA, as well as its partner organization the Women’s National Basketball Association and individual players for both leagues.

Previously, teams have turned their arenas or practice facilities into polling centers. In 2020, Los Angeles Lakers star LeBron James co-founded the voter advocacy group More Than a Vote. The organization focuses on expanding voting access for Black Americans, many of whom are disproportionately impacted by voter suppression efforts, according to the Brennan Center for Justice.