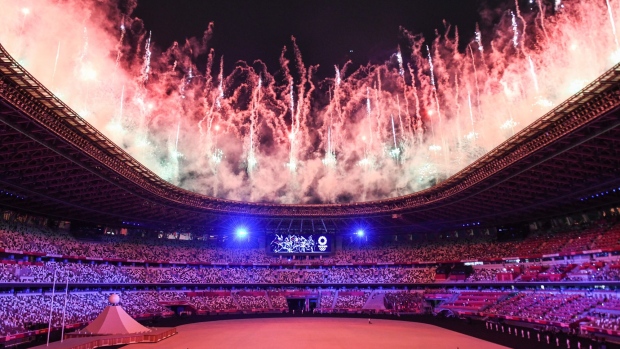 Fireworks during the opening ceremony of the Tokyo 2020 Olympic Games at the National Stadium in Tokyo, Japan, on Friday, July 23, 2021. For the first time in history, events at Tokyo 2020 will be held without spectators and winners will place their own medals around their necks. , Bloomberg

(Bloomberg) -- NBC’s viewership for the Olympics opening ceremony fell sharply, an early sign of the challenges the network faces in attracting a large audience during a pandemic amid a shift in viewing habits.

On Saturday, NBC saw some viewership gains, with its morning cable coverage up 24% from the corresponding day in Rio, according to NBC.

In addition, NBC’s streaming service, Peacock, recorded its most-watched Saturday. So far, viewers have streamed 21% more minutes of the Tokyo Olympics than they did the Rio games in 2016.

Like the other Olympic events this year, the opening ceremony was quieter, taking place inside a mostly empty venue after Olympics organizers banned most spectators due to rising Covid-19 cases in Tokyo.