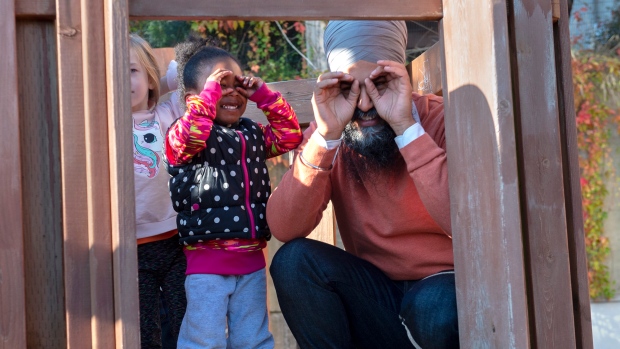 NDP Leader Jagmeet Singh and a young girl imitate the cameras as they stand on a play structure during a campaign stop at Hastings Park Childcare in Vancouver on Monday, Sept. 30, 2019. , THE CANADIAN PRESS/Andrew Vaughan

OTTAWA -- NDP Leader Jagmeet Singh is promising to spend $10 billion over the next four years to create 500,000 new child-care spaces in Canada.

In an announcement at a child-care centre in Vancouver, Singh says a right to accessible and affordable child care would be enshrined in law under an NDP government.

That legislation would include provisions for training new child-care workers and ensuring they are paid appropriate wages.

The goal is  to make sure care is available either at no cost, or a low cost of around $10 per day, for all families by 2030.

Singh repeatedly attacked the record of Liberal Leader Justin Trudeau, who he said "walked away" from families in need of child-care support.

It was Singh's seventh straight day in British Columbia, where he has made several regionally focused announcements.