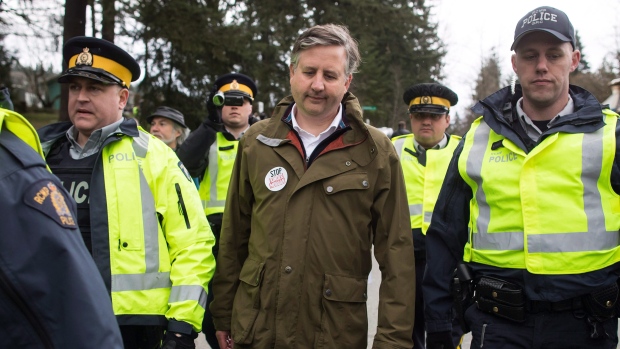 VANCOUVER -- New Democrat MP Kennedy Stewart says he knew he'd face legal punishment when he violated an injunction at a Kinder Morgan work site but he has no regrets about protesting the expansion of the Trans Mountain pipeline.

Stewart says he pleaded guilty to a criminal contempt of court charge in British Columbia Supreme Court on Monday after he was arrested outside Kinder Morgan's pipeline terminal in Burnaby, B.C., on March 23.

"The police read me the injunction and I understood it and I expected there would be some punishment, some consequences," he said in a telephone interview after appearing in court. "I wasn't going to try and wriggle out of them or anything."

Stewart, who is stepping down as the MP for Burnaby South to run for Vancouver mayor, said he was ordered to pay a fine of $500 by Friday.

"I told the judge today that I deeply respected him and the rule of law but I had pledged to stand with my constituents and that's why I did it, in order to protect the coast and our economy and our community," he said.

Green party Leader Elizabeth May was also arrested the same day and is scheduled to appear in court on May 28.

Special prosecutors were appointed after B.C. Supreme Court Justice Kenneth Affleck called for criminal contempt charges to be laid against demonstrators alleged to have violated a court injunction requiring protesters to stay five metres away from two work sites in Burnaby.

Dozens of people have been arrested for protesting against the pipeline expansion, which would triple the flow of heavy oil products from Edmonton to Burnaby.

Stewart said he's been fighting against the project alongside his constituents since 2011 and will continue to speak out until his time as an MP is done next month.

Voters will be able to pass their judgment on the court case in October's municipal election, Stewart said.

"The thing about democracy is that on Oct. 20 there will be a vote and people will decide what they think about this themselves," he said. "I hope it speaks to my character and that's what I hope they take away from this whole thing."

Stewart said he would like to see politicians be more vocal about issues important to their constituents but wouldn't say if he'd risk being arrested again.

He said he hopes the pipeline expansion is "close to dead."

Kinder Morgan announced earlier last month that it is pulling back on spending for the project and wants a clear signal by May 31 that it won't be delayed by further court battles. The federal government approved the 1,700-kilometre pipeline expansion in November 2016, saying the project is in the national interest.