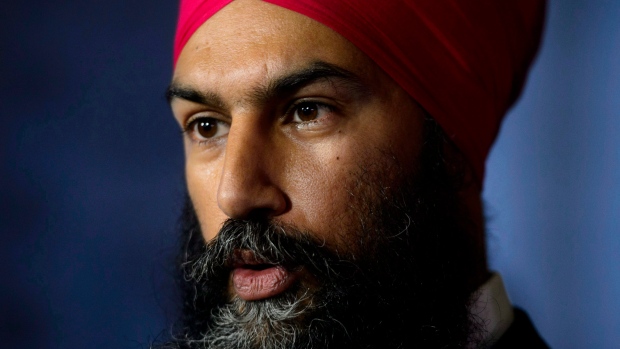 Jagmeet Singh is promising an NDP government would expand the tax on investment profits as part of a package of measures aimed at taxing the rich to pay for pharmacare as well as affordable child care and housing.

The federal NDP leader pitched the plan Friday during a keynote speech to the annual Broadbent Institute's Progress Summit, which brings together progressives and New Democrats from across the country.

It is expected to form a key plank in the NDP's election platform this fall alongside other policy proposals the party says will target the rich, pay for more services for Canadians and cool the housing market.

While the government currently taxes 50 per cent of profits made on investments, known as capital gains, the NDP wants to increase that threshold - known as the “inclusion rate” - to 75 per cent.

The party estimates the move, which would also apply to the sale of most real estate but not primary residences, tax-free savings accounts or registered retirement plans, would generate nearly $3 billion in additional revenue for the federal treasury.

“When you go to work, you're taxed on almost all of your income,” Singh said. “It doesn't make sense that someone making their money from investments is taxed on only half.”

The inclusion rate for capital gains has fluctuated since it was introduced in 1972, when it was 50 per cent. It was raised several times in the intervening years to a high of 75 per cent, before Jean Chretien's government cut it to its current rate in 2000.

The question of raising the inclusion rate on capital gains has been hotly debated for years, with some suggesting it would address inequality and others arguing it would hurt Canadians' savings and make the country less attractive for investors.

New Democrats have also previously talked about closing a stock-option loophole and cracking down on the use of bearer shares and foreign tax havens they say help the rich hide their wealth and avoid paying their fair share of taxes.

The government in its most recent budget moved to address the stock-option loophole by putting a $200,000-limit on the tax-deductible amount on employee stock options.

The stock-option deduction works by taxing only 50 per cent of the earnings an employee receives when they cash in any stock options received as part of their compensation packages, if certain conditions are met.

The new limit appears aimed at tightening the loophole while acknowledging concerns that closing it entirely would make it more difficult for companies to attract talent and discourage start-ups.