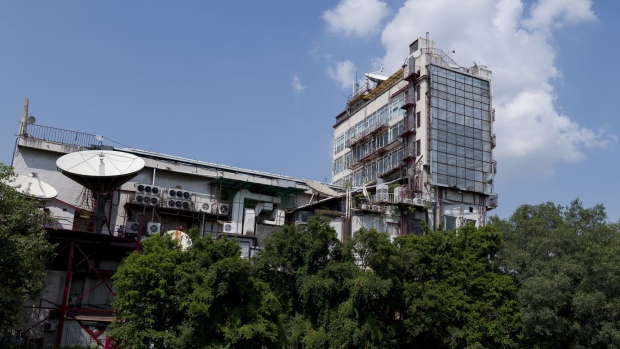 (Bloomberg) -- The founders of New Delhi Television Ltd. resigned from the board of the holding company that owns a major stake in the Indian broadcaster as Asia’s richest man, Gautam Adani, gains ground in the hostile takeover battle.

Prannoy and Radhika Roy, the husband and wife journalist team who set up the media house in the 1980s, stepped down from RRPR Holding Pvt., NDTV said in a statement late Tuesday. The vehicle owns an almost 30% stake in NDTV and was indirectly acquired by the Adani Group in August -- triggering a wider open offer by the powerful Indian tycoon to buy a further 26% in the media company.

RRPR appointed two Adani Group executives -- Sudipta Bhattacharya and Sanjay Pugalia -- to the board, as well as Senthil Chengalvarayan, a journalist who is an independent director at Quintillion Business Media Pvt., another media firm in which Adani bought a stake in earlier this year.

The board recast shows the takeover battle is entering its final stages, overruling Roys’ opposition amid wider concerns that the transaction would erode press freedom given the tycoon’s perceived close relationship with Prime Minister Narendra Modi. The media organization was one of the few Indian newsrooms that wrote stories critical of the federal government.

The Roys didn’t respond to messages seeking comment. The duo own 32.3% in the media firm as of quarter ended Sept. 30. They continue to be directors on the board of NDTV, according to information available on the BSE website.

Adani told the Financial Times this month that he intends to scale up NDTV to make it an international media group and had asked Prannoy Roy to remain as chair.

Their resignations come after NDTV said Monday that RRPR had issued 99.5% of its equity shares to an Adani controlled entity. The Adani Group is also in the midst of its open offer to buy more from NDTV’s minority shareholders. A third of the offer, scheduled to conclude on Dec. 5, has already been subscribed despite a steep discount to the current stock price.

When it was first launched, NDTV was a pioneer at a time when India’s main news channel was a stodgy state-owned broadcaster. NDTV has since grown into a prominent media house that broadcasts news in English and Hindi.

Adani is now one step closer to gaining a larger footprint in India’s media sector as part of his broader diversification spree to expand his empire beyond coal mining and ports into airports, data centers, cement and digital services.

NDTV’s shares rose as much as 5.3% during trade in Mumbai on Wednesday, pushing the surge this year to almost 285%. By comparison, benchmark S&P BSE Sensex has advanced 7.7% in 2022.

--With assistance from Kartik Goyal.

(Updates with Roys’ share holding in NDTV in the fifth paragraph.)