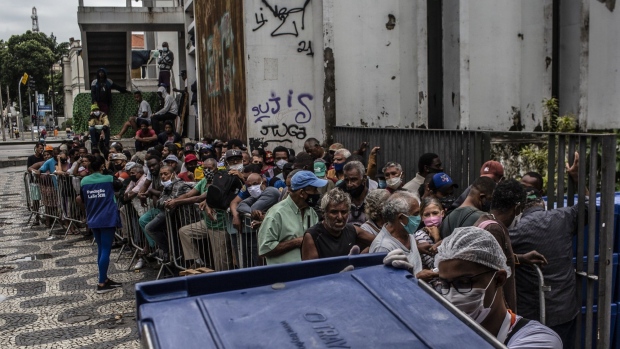 People stand in line to receive food outside the Biblioteca Parque Estadual in downtown Rio de Janeiro, Brazil, on Thursday, April 29, 2021. The Covid-19 pandemic has sent a wave of poverty racing across Latin America, deepening declines that began over the past decade and consigning millions to lives of deprivation. Photographer: Dado Galdieri/Bloomberg , Bloomberg

(Bloomberg) -- Hunger in Latin America and the Caribbean reached levels not seen in two decades in 2020 as the pandemic swept away jobs and pushed many in the region into poverty.

The number of Latin Americans who don’t have access to enough food rose by 13.8 million to 59.7 million between 2019 and 2020, according to a United Nations report released Tuesday. The prevalence of hunger in the region is now at 9.1%, the highest it has been in the last 15 years. Pre-pandemic, about 7% of the people in Latin America were exposed to hunger.

At the same time, moderate or severe food insecurity threatened 267 million Latin Americans at the height of the pandemic, roughly 60 million more than in 2019. Latin America posted the largest increase of any region in the world, with more than 40% of the population now dealing with food insecurity. The Northern Triangle nations -- El Salvador, Guatemala and Honduras -- registered the biggest hike, followed by Ecuador and Mexico. In the Caribbean, 70% of the people now experience food insecurity.

The report notes that although the pandemic has worsened the situation, it’s not responsible for all setbacks, as the situation in the region has been deteriorating for six consecutive years. “We have returned to the levels of 15 years ago, and we are losing the battle against all forms of malnutrition,” it says.

“We must say it loud and clear: Latin America and the Caribbean is facing a critical situation in terms of food security,” Julio Berdegue, regional representative at the Food and Agriculture Organization, said in a press release. “There has been an almost 70 percent hike in hunger from 2014 to 2020.”

The Regional Overview of Food Security and Nutrition 2021 was published by the FAO, the International Fund for Agricultural Development, the Pan American Health Organization/World Health Organization, the World Food Programme and the United Nations Children’s Fund.