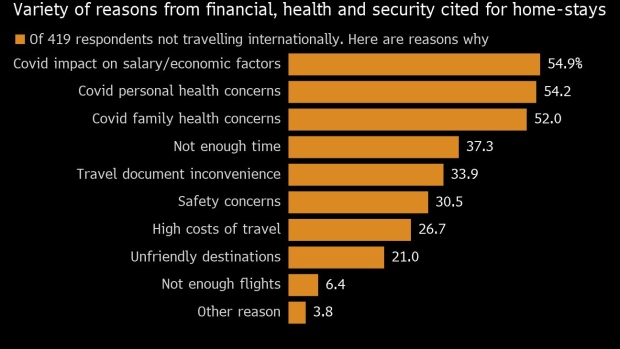 (Bloomberg) -- About 40% of Chinese travelers aren’t planning to venture overseas this year despite the sudden easing of restrictions, mainly because of the financial impact of Covid, according to a survey published Thursday.

Health concerns, the inconvenience of applying for travel documents, busy work schedules, worries over safety and unfriendly destinations to Chinese were also among factors deterring overseas travel, the Dragon Trail International survey of 1,058 people in 49 cities found. It was conducted from Jan. 4 to 7, just before the lifting of curbs such as mandatory quarantine came into effect.

Data from the National Bureau of Statistics released Tuesday showed consumer spending in China fell last year on a per person basis as households saved more money and income growth slowed. The economy as a whole expanded 3% in 2022, the second-slowest since the 1970s. This year’s growth should be close to 5%, economists forecast, but consumer confidence is near record lows.

Also, airfares globally have been rising as the world emerges from the pandemic and people travel again. Airlines are struggling to bring back capacity fast enough to cope with the rebound in demand, driving up prices. China’s international flight capacity is only at about 13% of pre-Covid levels, according to data provider VariFlight, while domestic activity is back to 100%.

Survey respondents intending to head overseas are mainly looking past the coming Lunar New Year holiday and to the second half of the year, data and marketing agency Dragon Trail said in its report — one of the first snapshots of Chinese outbound travel demand after three years of Covid-Zero restrictions. China was the world’s biggest source of tourists before the pandemic.

The recovery will pick up gradually and then accelerate from July and into the national holidays in September and October, Dragon Trail said. “The big winners” will include Hong Kong, Macau and Thailand, while border policies make Japan and South Korea “look decidedly less friendly and accessible.”

The top seven destinations are in Asia, followed by France, Australia and Russia.

About 71% of the respondents who plan overseas travel are considering trips of 5 to 10 days, while 45% said they’ll keep budgets within 20,000 yuan ($2,950). Online travel agencies are most popular for planning outbound travel, followed by the official channels of airlines and hotels.

The survey findings were echoed by Jane Sun, chief executive officer of Trip.com Group Ltd., China’s biggest online travel platform. At the World Economic Forum in Davos, she said outbound travel should recover by the second half of the year. A lack of international flights poses a challenge for now, she said.

--With assistance from Lily Girma.