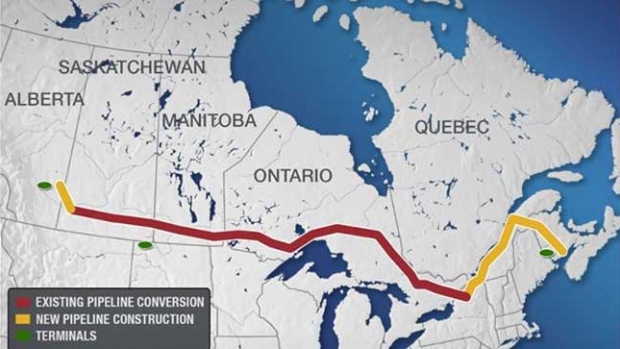 CALGARY -- The National Energy Board officially started the clock Thursday on its review of the contentious Energy East pipeline project.

The NEB now has 21 months to hold hearings along the 4,500-kilometre route from Alberta to New Brunswick and report to government whether the pipeline is in the national interest.

The hearings will begin in Saint John, N.B., on Aug. 8 and NEB director Jean-Denis Charlebois said the review will be one of the most comprehensive ever conducted by the regulator.

"This review will be unlike any other in the NEB's history," Charlebois said during a briefing Thursday. "All Canadians who wish to take part in the decision on this project will be heard."

While the review is only now beginning, the debate around the TransCanada (TSX:TRP) project has already become polarized, with environmental groups and some First Nations and politicians expressing total opposition.

Meanwhile, the oil industry, along with the premiers of Alberta, Saskatchewan and New Brunswick, have come out staunchly in favour.

The review will factor in greenhouse gas emissions caused by the construction of the project, but potential upstream emissions will be left to Environment and Climate Change Canada to tally and for the federal cabinet to factor into its final decision.

The $15.7-billion Energy East pipeline would open new markets for Canadian oil by carrying 1.1 million barrels of Alberta and Saskatchewan crude to refineries in Eastern Canada and an export terminal in New Brunswick.