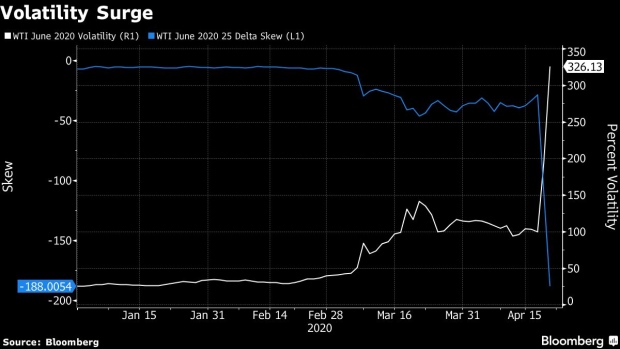 (Bloomberg) -- Oil’s plunge below zero for the first time in history hasn’t just sent shockwaves through the industry. It has also literally broken the models that many traders rely on to calculate risk.

For Wall Street’s biggest banks, that has meant a frantic scramble over the past 24 hours to recalculate the value and riskiness of their trading books to account for a world in which oil can go negative.

The implications are enormous. Allowing for the possibility of negative prices has made some positions much riskier, exposing some banks and traders to potentially significant losses and triggering a rush to recalibrate that has exacerbated the wild swings in the markets.

In particular focus are put options, which banks typically sell to oil producers wanting to hedge against a sharp drop in prices. Conventional ways to calculate the price of options, like the famed Black-Scholes model, operate on the assumption that oil prices can’t go below zero.

That means that if, say, a bank had sold a put option that gave its client the right to sell oil at $20 a barrel, it would be confident that it couldn’t lose more than $20 a barrel on the deal.

Now that assumption has to be thrown out. With the decline in oil prices now potentially limitless, there is no longer a cap on the potential losses. That’s a headache for banks and traders participating in the industry’s largest hedge, Mexico’s annual sovereign hedge, which involves the country buying puts on hundreds of millions of barrels of its crude.

Rewriting risk models, combined with a surge in volatility, means that calculations of “value-at-risk,” the statistical metric many banks and trading houses use to estimate the probability of losses, are skyrocketing.

To be sure, there are plenty of ways to adjust models for the possibility of negative prices. It’s something bond traders have come to terms with in recent years as more countries around the world have started targeting negative interest rates.

Still, the speed at which oil has swung to sub-zero prices has left traders in shock, and contributed to wild gyrations in the market. In the options markets, for example, bid-ask spreads have widened drastically, a sign that fewer traders are willing to take on additional risk.

The bid-ask spread on $20 puts for June WTI was nearly $3 at various times on Tuesday, compared to just 15 cents last week. Several traders and brokers said that they were being quoted bid-ask spreads that were many times wider than normal.

So far, CME Group Inc has said only that May WTI futures could trade at negative prices. But traders are already looking ahead to the possibility that June WTI futures, which on Tuesday plunged to less than $7 a barrel, could also fall into negative territory. ICE Brent options contracts will switch models to enable trading of negative strikes if there’s demand to do so, the company said.

There has been a surge in interest in 50-cent puts for June WTI -- which traded as high as $3.90 on Tuesday, implying that traders are already working on the assumption that June WTI futures could turn negative.

“From a market maker perspective, particularly those sitting at a flow trading desk or a major, their assumption, especially if you’re young and haven’t experienced any major market events, the assumption is that $0 was always the minimum,” said Michael Corley, president of Mercatus Energy Advisors. “That’s not the case anymore.”