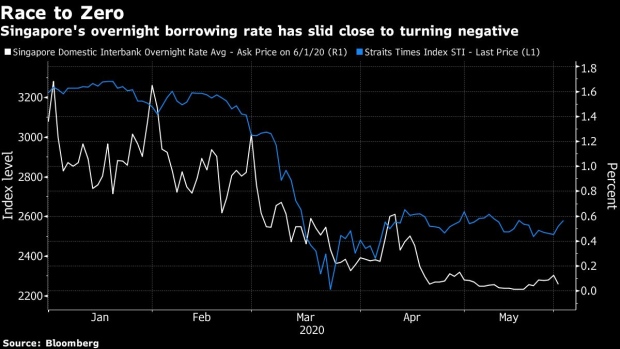 Men ride on an escalator past an electronic screen and ticker board displaying stock figures at the Singapore Exchange Ltd. (SGX) headquarters in Singapore, on Thursday, Jan. 19, 2017. The SGX has tendered a 4.75% stake in the Bombay Stock Exchange for sale in an initial public offer, valuing its shares at S$42.8m to S$42.9m, the exchange said in a filing today. Photographer: Ore Huiying/Bloomberg , Bloomberg

While a decline in interest rates is generally seen as good for stocks, the benefits of Singapore’s slide toward negative territory are far from certain.

The city-state’s overnight borrowing rate slid to within two basis points of zero last month while the one-month swap-offer rate turned negative for the first time in almost nine years. The relative appeal of the nation’s $370 billion stock market boosted by the sub-zero rates is overshadowed by the negative implications for the economy and financial system.

Singapore’s gross domestic product is expected to shrink 4%-7% this year, its worst contraction since independence in 1965, as the pandemic pummels the trade-reliant economy. The plunge in money-market rates came as the Monetary Authority of Singapore promised to provide sufficient financial liquidity, while the government has deployed stimulus of S$92.9 billion ($66 billion) so far.

“Falling rates and sovereign yields mean that stocks would appear more attractive versus bonds,” said Eli Lee, head of investment strategy at Bank of Singapore Ltd., cautioning that context is key. But “as we have learned from Japan and Europe, ultra-low rates typically result from policy efforts to combat deflationary pressures and economic headwinds.”

While sub-zero rates have been a reality for years in Europe and Japan, the U.S. Federal Reserve has consistently opposed them, citing uncertain efficacy and potential damage to the financial system. Some Singapore investors are similarly concerned that steps taken elsewhere may not work for the tiny island nation.

“Negative interest rates would be very detrimental in Singapore given the country’s stock market has high exposure to financials,” said Nader Naeimi, the head of dynamic markets at AMP Capital Investors Ltd. in Sydney.

Naeimi believes that in Japan and Europe, negative rates have crimped bank margins, broken a key channel for the transmission of monetary policy and caused bearish phases in the stock market.

Singapore is starting to reopen its economy from a pandemic lockdown, even as it races to contain the outbreak among thousands of foreign workers. Containment will be the key issue for share prices, said Paul Sandhu, head of multi-asset quant solutions and client advisory for Asia Pacific at BNP Paribas Asset Management.