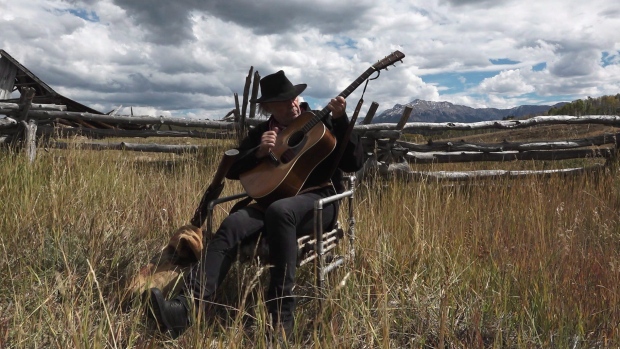 Neil Young as the Man in the Black Hat is shown in the film "Paradox" in this undated handout photo. , THE CANADIAN PRESS/HO - Netflix

Hipgnosis Songs Fund Ltd. bought 50 per cent of the rights to folk and rock songwriter Neil Young’s discography, marking the latest in a bonanza of music rights acquisitions after artists, cut off from touring income by the coronavirus pandemic, look to raise cash.

Hipgnosis announced Wednesday the purchase of half the copyright and income interests for the Canadian singer’s 1,180 songs, including hits like “Heart of Gold,” following deals for the music of producer Jimmy Iovine and Fleetwood Mac guitarist Lindsey Buckingham earlier in the week. Last month, Neil Young’s fellow 60s icon Bob Dylan sold his music rights to Universal Music Group Inc.

Since floating in 2018, the London-listed company has raised more than 1.05 billion pounds (US$1.4 billion) in equity capital to bet big on the value of song royalties. Founder Merck Mercuriadis believes hit songs have become an asset class that will generate reliable revenues from consumers who are treating music as essential and signing up to streaming services like Spotify AB.

Hipgnosis now co-owns ten of the streaming platform’s top 30 most-played songs. During 2020, Mercuriadis scooped up rights to songs by crooner Barry Manilow, producer Mark Ronson, the Wu-Tang Clan’s RZA, and the co-founders of 80s pop group Blondie. He was previously a manager for acts including Elton John and Guns N’Roses. Hipgnosis did not reveal the value of the deal for Neil Young’s back catalog.

Mercuriadis is now contemplating further fundraising as he spies further catalogs. The company’s stock price rose 12 per cent over 2020 to 1.24 billion pounds despite a wider U.K. stock market slump.

Mercuriadis, who professed himself to be a lifelong Neil Young fan, acknowledged that getting a financial return on music can raise issues around artistic integrity.

“There will never be a ‘Burger Of Gold,’ but we will work together to make sure everyone gets to hear them on Neil’s terms,” he said in a statement, referring to a 1973 concert where Young half-joked that been asked to use a re-named version of his hit Heart of Gold for a burger advert.