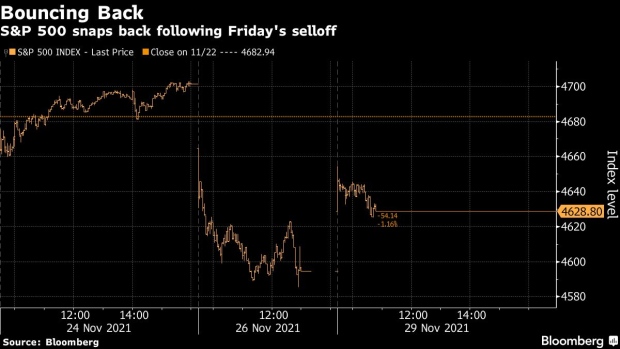 (Bloomberg) -- Friday’s stock-market drubbing reignited coronavirus-related fears for traders. Now, many are taking to reading charts for clues to where prices might settle.

The two key levels to watch for the S&P 500 are 4,546, which represents the September high before that month’s retreat, and 4,489, which is the redrawn long-term uptrend support from the March 2020 and October 2021 lows, according to RBC Capital Markets’s Lori Calvasina. A close below 4,489 would cause damage to the long-term uptrend and signify a roughly 5% decline from year-to-date highs.

“That’s a good starting point for thinking about how far a correction in the market could go as long as investors don’t start to price in recession risks,” she wrote in a note.

Friday proved to be one of the toughest days of the year for markets as governments across the globe stepped up restrictions as the World Health Organization warned that omicron, the new coronavirus variant, could fuel a surge in infections.

Reports of mild omicron cases so far brought some stability to markets, with stocks and crude oil rebounding from Friday’s steep drops. The S&P 500 was up about 1.2% at 4,648 as of 11:44 a.m. in New York, while the tech-heavy Nasdaq 100 gauge added 2%. Cyclically-oriented sectors led gains, with consumer discretionary and real estate shares among the strongest advancers.

Scientists in South Africa, where omicron was first detected, said it appears to spread more easily but that existing vaccines are likely to protect against severe illness. That prompted Pershing Square Capital Management founder Bill Ackman to predict that if symptoms turn out to be mild to moderate, that’d be bullish for equity markets.

It makes sense to see stocks recover during Monday’s session, according to Nicholas Colas, co-founder of DataTrek Research. Over the past year, stocks have tended, on average, to post 0.5% rallies in the session after a greater-than-2% decline, he said.

“This is what’s happened, on average, for over a year and will signal investor confidence that the new pandemic variant is not an existential threat to the ongoing global economic recovery,” he wrote in a note.

To Fiona Cincotta, senior financial markets analyst at City Index, a close above 4,650 -- near where the S&P is holding -- would be an encouraging sign. But any sight of 4,585 -- the lows from Friday -- being broken on the downside means deeper declines could be in the offing still.

“There is so much that’s still unknown,” she said by phone. “The market, we know, dislikes uncertainty, and there is a large element of uncertainty, which is going to be hopping around over the coming weeks. We could, in fact, possibly see some more selloffs, some more downside and some more upside, but I think volatility is going to be key.”