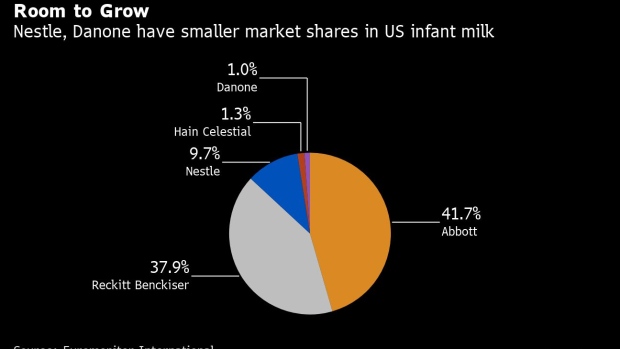 (Bloomberg) -- Nestle SA, the owner of Gerber baby food, said it’s airfreighting infant formula to the US, where a shortage has left shelves empty and parents scrambling.

The world’s largest food company has rushed shipments of Gerber Good Start Extensive HA from the Netherlands and Alfamino from Switzerland, prioritizing these because they’re needed for babies with allergies to cow milk protein, a spokesperson said in an emailed statement.

The shortage started with supply chain issues during the pandemic and was exacerbated by a recall stemming from a September complaint, when infant formula made by Abbott Laboratories was first linked to a case of a rare bacterial infection. Danone, the owner of the Happy Family and Happy Baby labels, said it’s working to boost production, as is Nestle.

The shortage has prompted calls for more flexibility to purchase alternative formulas, especially for low-income families on federal assistance. Nearly half the infants in the program are covered by an Abbott contract.

Nestle said it has ramped up production, with factories running at capacity, and is increasing its product offering in brick-and-mortar and online shops, as well as hospitals.

Danone continues to push for increasing production as much as possible, a spokeswoman said in an email. The company’s website also lists recommended substitutions with similar recipes.

“High demand has impacted our formula availability,” she said, declining to comment on whether the company was shipping any products from other regions or which formulas it’s prioritizing. “Our manufacturing facility is running at maximum capacity and we are prioritizing production of our top-selling infant formulas.”

Reuters earlier reported Nestle’s shipping of baby formula to the US.