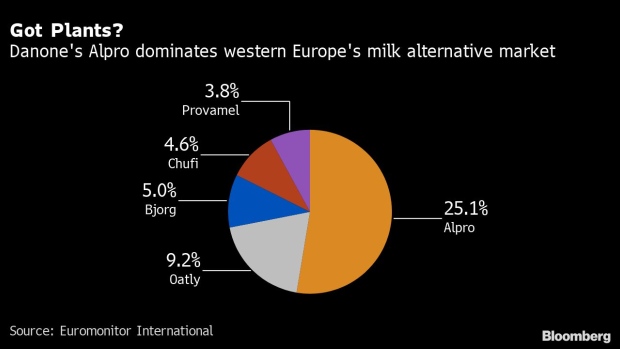 (Bloomberg) -- Nestle SA is introducing a plant-based milk brand to compete with Danone’s Alpro and Oatly AB in the growing market for dairy substitutes.

The pea-based milk alternative, called Wunda, will be available in France, the Netherlands and Portugal in the coming weeks, the Swiss maker of Nespresso coffee and Purina pet food said in a statement Wednesday. A rollout in other European countries will follow, and Wunda will also look at options for expanding into other dairy-free products like yogurt.

Nestle, the world’s largest food company, was slower than rivals in tapping into the vegan craze. Danone placed a $10 billion bet on plant-based foods with its 2017 acquisition of WhiteWave, giving it the Silk and Alpro brands in the U.S. and Europe, respectively. Companies like Beyond Meat Inc. also got a jump on Nestle in marketing meat substitutes to mainstream consumers. Even so, Nestle’s wide distribution network gives it the advantage of being able to roll out new products easily across retail outlets.

Nestle is moving into cow milk substitutes as Sweden’s Oatly prepares for an initial public offering in the U.S. Wunda also poses a threat in Europe to Danone, which sells dairy alternatives under the dominant Alpro brand. Danone has been expanding into vegan cheese and mayonnaise with a goal to more than double its plant-based revenue to 5 billion euros ($6 billion) by 2025.

Milk alternatives based on soy, almond, rice, coconut or oats have become increasingly prevalent in supermarkets in recent years as consumers focus on animal rights and environmental issues. The world’s 270 million dairy cows are a major source of greenhouse gases, while milk production puts pressure on natural resources like water and soil. Western Europe’s $2.8 billion market for milk substitutes is expected to grow some 30% by 2024, according to Euromonitor data.

Wunda beverages are made from yellow peas, sourced from France and Belgium, that help boost the protein content. The range is carbon neutral through measures like using renewable energy in production and investments in forestry projects, according to the Nestle statement.

Nestle has increasingly been working with pea proteins for products like tuna, sausage and burger alternatives.

The company has been adding plant-based options across its brands, including Nesquik chocolate drinks, Nescafe coffee and KitKat chocolate. Nestle already sells milk substitutes in Brazil under its Nesfit brand. The company’s global sales of plant-based food products amounted to about 700 million francs ($766 million) last year, while dairy substitutes generated about 100 million francs.

The bulk of Wunda’s revenue will come from supermarkets, with the product also sold in restaurants and cafes.