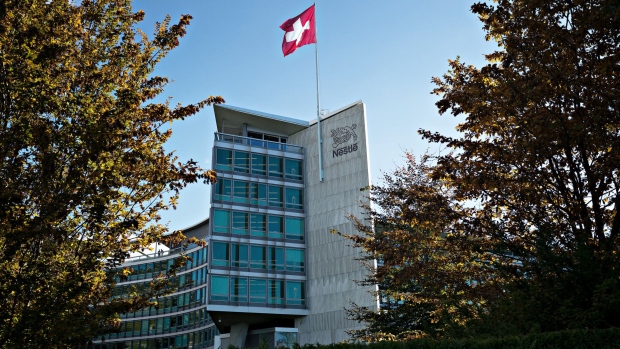 A Swiss national flag flies above the headquarters of the Nestle SA headquarters in Vevey, Switzerland, Oct. 20, 2016. Bloomberg/Michele Limina

Nestle SA is tweaking the recipe of its vegetarian burgers after half a year on the market amid stiffening competition for meat substitutes.

Nestle Chief Executive Officer Mark Schneider is revamping the company’s faux-meat offering as a wave of upstart competitors including Beyond Meat Inc. and Impossible Foods Inc. enters the mainstream. He’s been pushing Nestle managers to accelerate development of products like the Incredible Burger and accept the risk that they may need reworking.

Beyond Meat has stormed into fast-food and high volume catering in collaborations with Tim Hortons, Dunkin’ Donuts and Aramark. Closely held Impossible Foods’s burger is on menus at some 10,000 restaurants — including White Castle, Red Robin and Burger King, according to the company.

Nestle started selling Incredible Burgers in Europe in April and aims to introduce a version called the Awesome Burger for the U.S. market this fall. The company declined to comment on the outlook for expanding its relationship with McDonald’s Corp., which sells Incredible Burgers in Germany.

The Incredible Burger has yet to come to the U.K., one of the most promising markets for meat substitutes, according to Wayne England, head of Nestle’s food business. Nestle ended a test of other Garden Gourmet items in Britain with a customer it didn’t identify earlier this year, though a limited number of products are still available in the U.K., the executive said on a call with reporters.