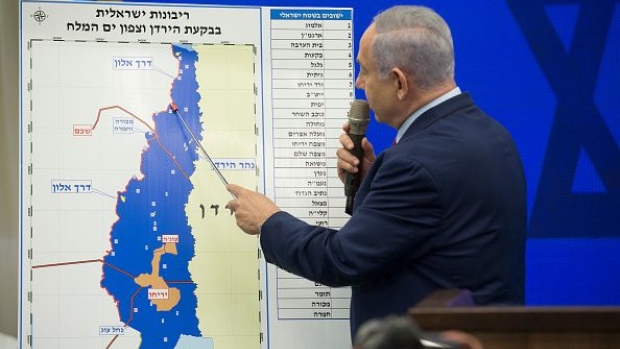 (Bloomberg Opinion) -- The campaign leading up to Israel’s Sept. 17 election has been a low point in a long political career for Prime Minister Benjamin Netanyahu. He entered it reluctantly after former defense minister Avigdor Lieberman defected, leaving Netanyahu’s Likud-led coalition without the 61 Knesset votes needed to rule. Blue and White and other parties on the center left swore never to join a coalition government led by Bibi.

Normally a happy electoral warrior, Netanyahu became frantic. He cut deals with the worst elements of Israel’s extreme religious and racist fringe. He preemptively warned that the election was going to be stolen from him. He failed to control his son and unofficial adviser Yair, whose shrill and vulgar Twitter attacks on the late Yitzhak Rabin have besmirched the proud Netanyahu name. Financial backers began to bail, there were rumors of grumbling at the usually sycophantic Likud headquarters, and press reports suggested that Donald Trump had stopped returning Bibi’s phone calls.

Then on Tuesday, one week before the vote, Netanyahu announced that, if elected, he would immediately annex the Jordan Valley, a large slice of mostly uninhabited but strategic West Bank territory alongside Jordan. This, he said, would give Israel a “secure and permanent” border for the first time in its history.

And the Valley would be just the beginning, he said. His “personal relationship with President Trump” would enable him to also annex all of the Jewish settlements in the West Bank — making this a once-in-a-lifetime opportunity for voters.

It was a shrewd move. His opponents — including the Blue and White Party, running neck and neck with Bibi in recently published polls, and Lieberman’s Yisrael Beiteinu party — are firmly committed to permanent Israeli control of the Jordan Valley and to retaining most of the settlements in the West Bank heartland. They were reduced to accusing the prime minister of floating empty campaign promises of the kind he had made and broken in the past.

In the past, however, Bibi did not have Donald Trump with him, and this time he does. The president’s silence following Netanyahu’s Jordan Valley announcement confirmed it. If Trump had a problem with Bibi’s claims, the world would have heard about it on Twitter.

Trump’s support, which presumably will find expression in the still-to-come American peace plan, effectively ends the Palestinian Arab hope for independence in the West Bank. More important, it opens the way for Blue and White to join a Netanyahu-led government.

Yes, Blue and White has vowed not to. But circumstances alter courses. If annexations are possible, then Benny Gantz, the head of Blue and White, and other party leaders have reason to go back on their promises. They can proclaim that Israel’s destiny is at stake, that sitting on the sidelines is no longer an option.

Shortly after making his announcement, Netanyahu traveled to the southern port city of Ashdod for a campaign rally. Hamas took note and fired rockets in the direction of the gathering. Sirens blared. The prime minister was hustled off the stage by security guards. The incident was filmed.

Netanyahu’s opponents are spinning this as a personal humiliation, but the country saw something different: their prime minister and, vicariously, themselves, under enemy fire. Bibi picked this up and used it. “I don’t know who was more gleeful about the attack, Hamas or Gantz and Yair Lapid (the leaders of Blue and White),” he later said. For the first time in weeks, he sounded like his old, self-confident self.

Bibi and his right-wing satellite parties still may not end up with enough seats to form a government. If he and Trump really plan to make history by finalizing Israel’s hold over the Jordan Valley and the settlements, he will need the backing of centrist ministers as well as the narrow nationalist coalition he currently leads. Thanks to Trump, with an assist from Hamas, that outcome is now plausible.

To contact the author of this story: Zev Chafets at zchafets@gmail.com

Zev Chafets is a journalist and author of 14 books. He was a senior aide to Israeli Prime Minister Menachem Begin and the founding managing editor of the Jerusalem Report Magazine.