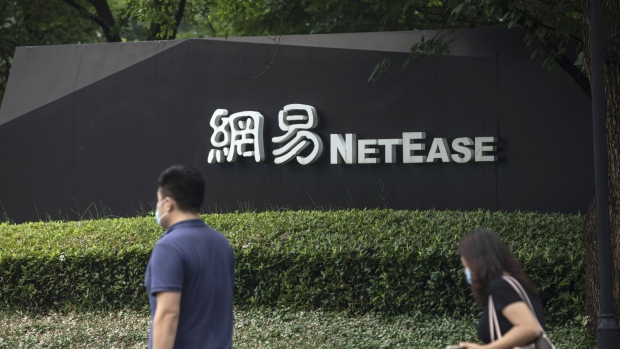 Pedestrians wearing protective masks walk past signage at the NetEase Inc. campus in Hangzhou, China, on Wednesday, June 10, 2020. NetEase Inc. soared more than 9% at the start of its first day of trading in Hong Kong on June 11, a solid debut that bodes well for a growing line-up of Chinese tech giants seeking to list closer to home. , Bloomberg

(Bloomberg) -- Shares of the music streaming arm of Chinese gaming giant NetEase Inc. opened unchanged in their trading debut in Hong Kong, following an initial public offering that priced shares at the mid-point of a marketed range.

The company began trading in the Asian financial hub after having put the listing on hold in August, delaying it just days after it began gauging investor demand. Initially it was pursuing an IPO of about $1 billion, Bloomberg News had reported in May.

The listing happened even as China tightened control over its data and introduced a draft new rule that would require Hong Kong IPO candidates to undergo a cybersecurity review if the data they amassed could impact national security. Cloud Village’s prospectus offered a lengthy analysis of the potential risks of the new regime, and said it hasn’t been involved in any investigation, nor has it received any inquiry or notice in relation to the new rule.

Cloud Village runs NetEase’s music streaming platform in China and generates most of its revenue through subscriptions, virtual gifting and advertising. Started in 2013, the music wing has since expanded its products to offer everything from online karaoke to live-streaming and lyrics sharing. The company has yet to deliver profit because of costs stemming from its fierce rivalry with Tencent Music Entertainment Group.

China International Capital Corp., Credit Suisse Group AG and Bank of America Corp. are the sponsors of the deal.