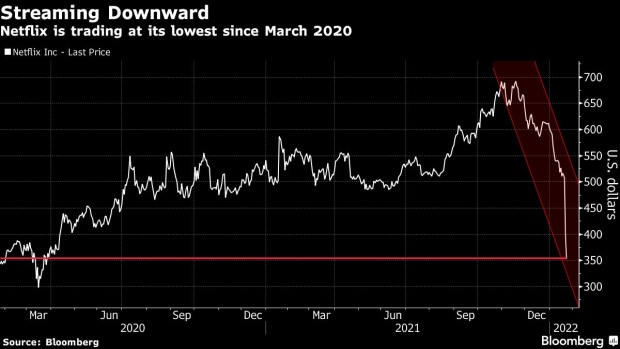 (Bloomberg) -- Netflix Inc. tumbled on Monday, with the video-streaming company extending a post-earnings selloff that has taken the shares to their lowest level since March 2020.

The stock fell as much as 11.6% and is down more than 30% over the past three trading days. Year-to-date, the stock has sunk more than 40%, making it the second-worst performer among Nasdaq 100 Index components, behind Moderna.

Shares of the pandemic-era trading favorite have gotten caught up in a widespread rotation out of growth stocks, as concerns over inflation and Federal Reserve tightening have made investors less tolerant of high-valuation names. Additional weakness came after Netflix gave a subscriber outlook last week that was weaker than expected. The stock fell almost 22% on Friday and January is on track to be the worst month for Netflix shares since September 2011.

The subscriber outlook spurred a flurry of analyst downgrades, with Jefferies joining the chorus on Monday. Analyst Andrew Uerkwitz cut his view on the stock to hold, seeing “too much uncertainty in the near term.” While user engagement is strong, he said the cost of acquiring incremental subscribers “has likely become too high.”

Evercore ISI wrote that as Netflix revenue growth “inevitably/eventually fades out of premium growth land,” which it believes just happened, the stock will become “more of a tactical long than a core long.”