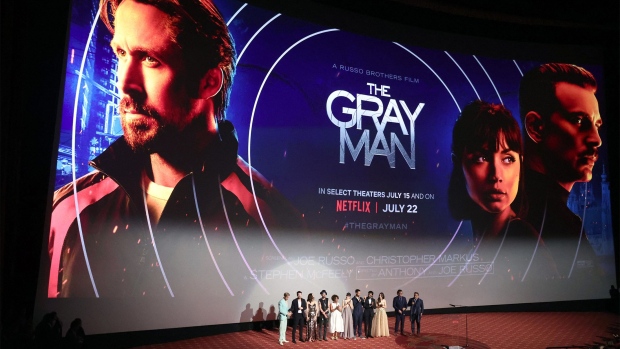 (Bloomberg) -- Netflix Inc. is trying a new approach in marketing its next big film: telling people it’s coming out.

The streaming service is orchestrating one of its biggest promotional pushes ever ahead of the July 22 streaming debut of “The Gray Man,” a spy thriller starring Ryan Gosling. The campaign includes billboards in several cities, as well as TV advertising spots during major sporting events.

The campaign is a test for the world’s most-popular paid video service, which hasn’t historically prioritized marketing titles before their release. Executives at Netflix and creators of shows have been pushing the company’s leadership to increase the marketing budgets for its movies and TV shows. Major movie studios spend tens of millions of dollars on marketing campaigns ahead of big releases to drive ticket sales on opening weekend. TV networks do the same so a show can grab a large audience upon its debut.

Netflix spent more than $2.5 billion last year on marketing, but it has never invested as much per title as its peers in Hollywood. It saves money by not spending so much on marketing up front, which would cost billions of dollars more, given that it releases hundreds of titles a year. The company has relied on its algorithm to serve the right show to the right viewer, and then spends money to amplify a project that’s already popular.

Netflix has been reevaluating its strategy, especially after a subscriber loss caused its stock to fall more than 70% this year. The company’s growth has slowed to a crawl in some of the biggest countries in the world at the same time that services such as HBO Max, Disney+ and Hulu have eaten into its share of the streaming market.

Netflix plans to introduce a cheaper, advertising-supported version of its service later this year, and just this week selected Microsoft Corp. to handle the advertising sales and technology. The company hopes that will entice price-conscious consumers to sign up for Netflix.

Increased competition has also made it harder for Netflix titles to stand out from the crowd. The company wants to make fewer, but better, movies. It restructured its marketing department earlier this year, not long after hiring a new chief marketing officer, Marian Dicus. Netflix has cycled through three CMOs in the last few years.

Netflix has ramped up its marketing spend over time and staged large pre-release marketing campaigns for new seasons of hit TV shows such as “Stranger Things,” “Ozark” and “Bridgerton.” It  bought national TV spots last month for “Hustle,” a basketball drama starring Adam Sandler, as well as “The Sea Beast,” an animated film.

Marketing budgets for movies have started to rise along with production budgets and star power. Netflix spent upwards of $100 million to produce “Red Notice,” an action comedy starring The Rock, Ryan Reynolds and Gal Gadot, and “The Adam Project,” which also starred Reynolds. The talent deals on “Red Notice” alone cost more than $50 million, according to reports.

“The Gray Man” is one of Netflix’s most-expensive bets yet with a reported production budget of $200 million. Gosling stars as an assassin for the Central Intelligence Agency who becomes a target after he uncovers dark secrets about the organization. Chris Evans, Ana de Armas, Wagner Moura and Rege-Jean Page also star in the movie, which is produced and directed by Joe and Anthony Russo, the filmmakers of several major Marvel movies.

When spending that kind of money on casts that famous, Netflix wants to make sure people know the title is coming out. It can’t spend $150 million on a movie that nobody sees. The talent also wants to know the service is supporting the project. Dicus, as well as co-CEOs Ted Sarandos and Reed Hastings, have all signed off on spending more to boost new titles.

Executives at Netflix have also pushed for the company to release its movies in theaters, believing that will generate additional money and awareness. Theaters won’t show the movies unless Netflix commits to spend money on marketing and an exclusive theatrical release of at least a few weeks.

Hastings and Sarandos remain skeptical of the benefit of movie theaters. “The Gray Man” will appear in cinemas for just a week before it’s available on the service, and it won’t be in most of the major chains.

Netflix shut down a block of Hollywood Blvd. Wednesday night for a premiere of the movie at the TCL Chinese Theatre, a 95-year-old venue in the heart of Hollywood. The event had the feel of a classic movie premiere, as stars traipsed down a lengthy red carpet and guests snacked on fried chicken and donuts. After the showing, they ventured to an after party at the nearby Hollywood Roosevelt hotel, site of the very first Academy Awards.