The COVID-19 pandemic isn’t over yet, but the boom it helped create for stay-at-home stocks is vanishing.

Netflix Inc. and Peloton Interactive Inc., two of the highest-profile stars of the lockdown era, both plunged Thursday -- the latest sign that investors have moved on from the so-called pandemic trade. Netflix expects to add a paltry 2.5 million users in the current quarter, well short of estimates. Peloton, meanwhile, is slashing costs to cope with slowing demand for its stationary bikes.

The two companies are the latest darlings of 2020 to sink to levels not seen since the early days of the COVID-19 outbreak, when investors first deduced that lockdowns and easy-money policies from the Federal Reserve were going to send stocks like Netflix soaring. 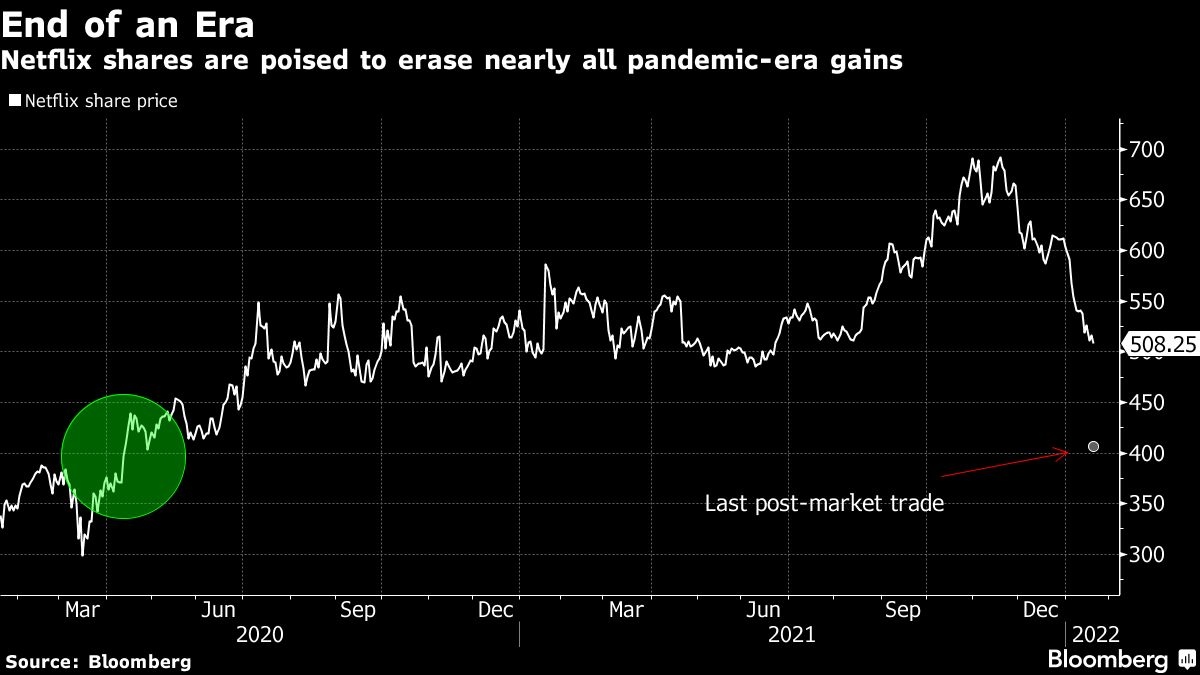 Others are suffering as well. Zoom Video Communications Inc., the owner of the ubiquitous videoconferencing software, is trading at the lowest level since May 2020, as is e-signature company DocuSign Inc. Both stocks have lost more than half of their market values from record highs and slid further after Netflix’s results. Etsy Inc., the e-commerce company that saw strong pandemic demand for face masks and other products, is down more than 45 per cent from a November peak. It last closed at its lowest since May.

Traditional media companies that have styled themselves as streaming businesses also took a hit in post-market trading. That includes Walt Disney Co. and ViacomCBS Inc.

Everyone expected a company like Peloton to suffer a slowdown as it emerged from the pandemic. But the severity of it came as a surprise. Peloton cut its 2022 forecast by about US$1 billion, and it’s reportedly pausing production of bikes and treadmills to cope with the slump. Late Thursday, the company pushed back on the idea that it was idling factories to save money, but confirmed that Peloton was cutting jobs and “resetting” production.

“We thought there could be a softer landing in terms of post-COVID demand,” Paul Golding, an analyst at Macquarie Capital, said in a note. “This dashes those hopes to some extent.”

The irony of pandemic favorites collapsing now is the COVID-19 threat has by no means subsided, and many areas are reimposing virtual schooling and even lockdowns. But the resurgence fueled by the omicron variant is showing signs of easing.

Netflix and Peloton had enjoyed a captive audience during the lockdowns. But having to hunt harder for customers isn’t the only problem as investors brace for Federal Reserve interest rate hikes.

Unlike Peloton, which began sliding early in 2021, Netflix had a remarkably swift fall from grace. The streaming giant was trading at a record high just two months ago.

Of course, a company like Netflix doesn’t need a global pandemic to thrive in the long run. The streaming service has long been a growth juggernaut. Since going public in May 2002, its shares have gained more than 47,000 per cent as quarterly revenue rose from US$30 million to more than US$7.7 billion.

Even though the Los Gatos, California-based company disappointed investors on Thursday, it still delivered revenue growth of 19 per cent and more than US$5 billion in profit in 2021.

“The Netflix flywheel is still working -- it is just operating at a slower pace,” said Pivotal Research Group analyst Jeff Wlodarczak. “Over time, we expect normalization in subscriber results and for the stock to work.”

The money flowing out of pandemic stocks is going into some sectors that were among the most ravaged by COVID. Energy stocks in the S&P 500, for example, have gained 15 per cent this year, the best performance among the benchmark’s main groups.

Another question is what this means for the rest of the tech world, including companies less tied to the vagaries of the pandemic. They’re already facing slowing profit growth and pressure on valuations. The Nasdaq 100 Stock Index has fallen 9 per cent this month, which is on pace to be the worst since 2008.

Netflix’s numbers will get more context when technology giants like Microsoft Corp. and Apple Inc. deliver their quarterly results next week.

“Brace yourself, these results cast a shadow on the rest of tech,” said Loup Ventures co-founder Gene Munster. “Until Apple reports and we hear from the Fed, the tech market will be on edge.”