Netflix Inc. expects to add just 2.5 million subscribers this quarter, a number that falls short of Wall Street’s estimates and would mark the slowest start to a new year for the company in at least a decade.

Shares of Netflix fell as much as 20 per cent to US$406.12 in after-hours trading, erasing about US$45 billion in market value and bracing investors braced for the prospect that the streaming giant is entering a new phase of slower growth. Walt Disney Co. and Roku Inc. also slumped.

Netflix added just 18.2 million customers in 2021, down about 50 per cent from the record year before. It’s forecasting that slowdown will continue, at least for another quarter, with the outlook for the current period missing Wall Street’s projection for 6.26 million new subscribers. 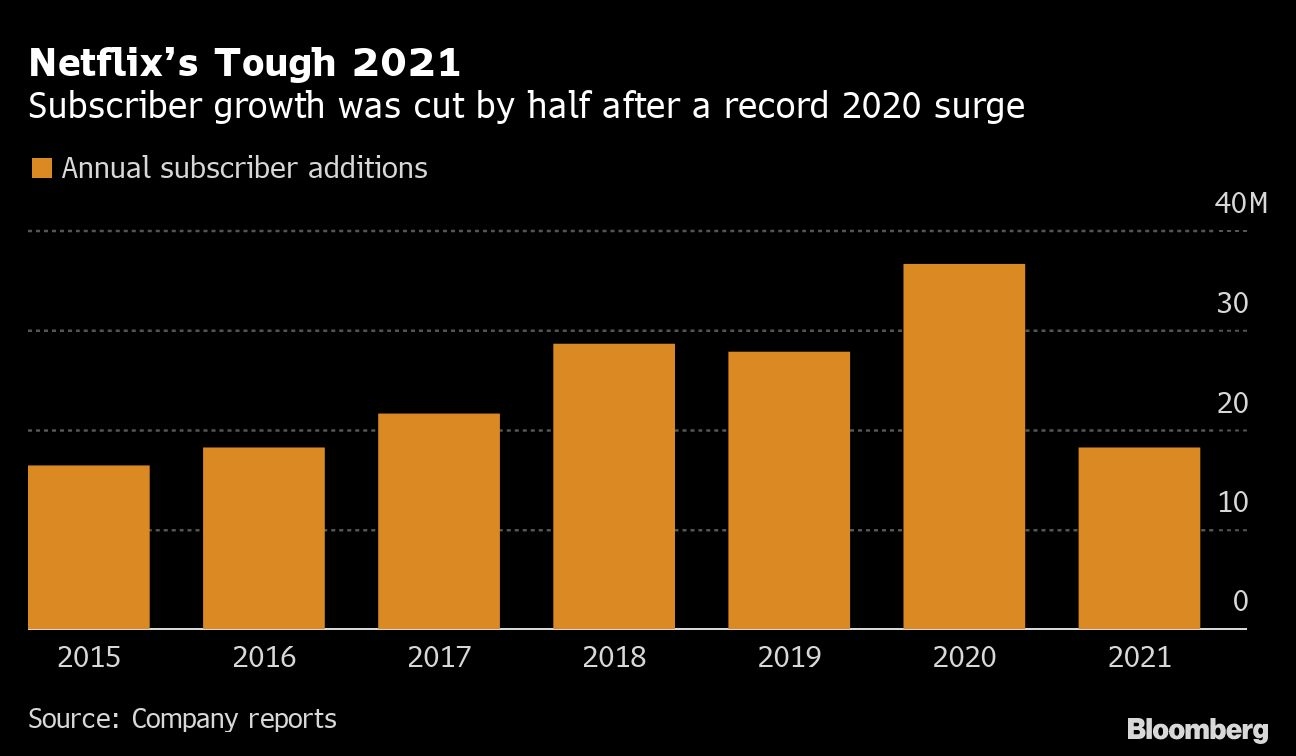 The company blamed a tough economy, especially in Latin America, as well as lingering fallout from the pandemic. Netflix reiterated its confidence in the long-term prospects for the business, but said growth “has not yet re-accelerated to pre-COVID levels.”

The ups and downs of the pandemic have made the company’s trajectory less predictable. Netflix posted its best subscriber growth ever in 2020, when billions of people were stuck at home. But the company has said that pulled from future growth and led to a slow start to 2021. The company ended the year with two strong quarters. Netflix signed up 8.28 million customers in the fourth quarter of 2021, according to a statement Thursday, beating Wall Street estimates, though shy of its own forecast of 8.5 million.

The just-ended quarter featured the biggest slate in Netflix history. The company released more big titles in the final months of 2021 than in any previous period. They included new seasons of the popular series “You” and “Money Heist,” the new shows “Maid” and “My Name,” and the movies “Red Notice” and “Don’t Look Up.”

Europe and Asia were the company’s most important markets in 2021. The company added 7.14 million customers in Asia Pacific and 7.34 million in Europe, Middle East and Africa. The strong dollar is costing Netflix money in many of those international markets. The company estimated that the dollar’s appreciation will reduce 2022 sales by about US$1 billion.

Netflix relies on a mix of subscriber growth and price increases to boost sales. The company raised prices in the U.S. and Canada this month. Those are two of its most mature markets, and places where it can derive more growth from price increases than new customers.

Netflix tends to raise prices in markets where it’s confident customers won’t drop the service in large numbers, including much of Western Europe, South Korea and Japan. It keeps prices the same, or even lowers them, in markets where it is still searching for more of a foothold, like Southeast Asia and India.

Asia will only get more important if Netflix wants to return its past growth. The company has already signed up more than half of the U.S. broadband homes in the U.S., and is reaching saturation in major European markets.