Netflix Inc. tumbled by the most since October 2014 as analysts downgraded the streaming giant after it gave an outlook for subscriber additions that fell short of Wall Street’s expectations.

The selloff of as much as 25 per cent on Friday dragged the stock to the lowest level since April 2020. At least nine firms tracked by Bloomberg cut their recommendation on the stock after Netflix forecast adding just 2.5 million customers in the first quarter, compared with analysts’ expectations for 6.26 million additions.

Intensifying competition is becoming a “bigger problem now” for Netflix, Macquarie analyst Tim Nollen said in a report, downgrading the stock to a sell-equivalent rating. The subscriber outlook is disappointing, and contributes to an uncertain outlook, he said. 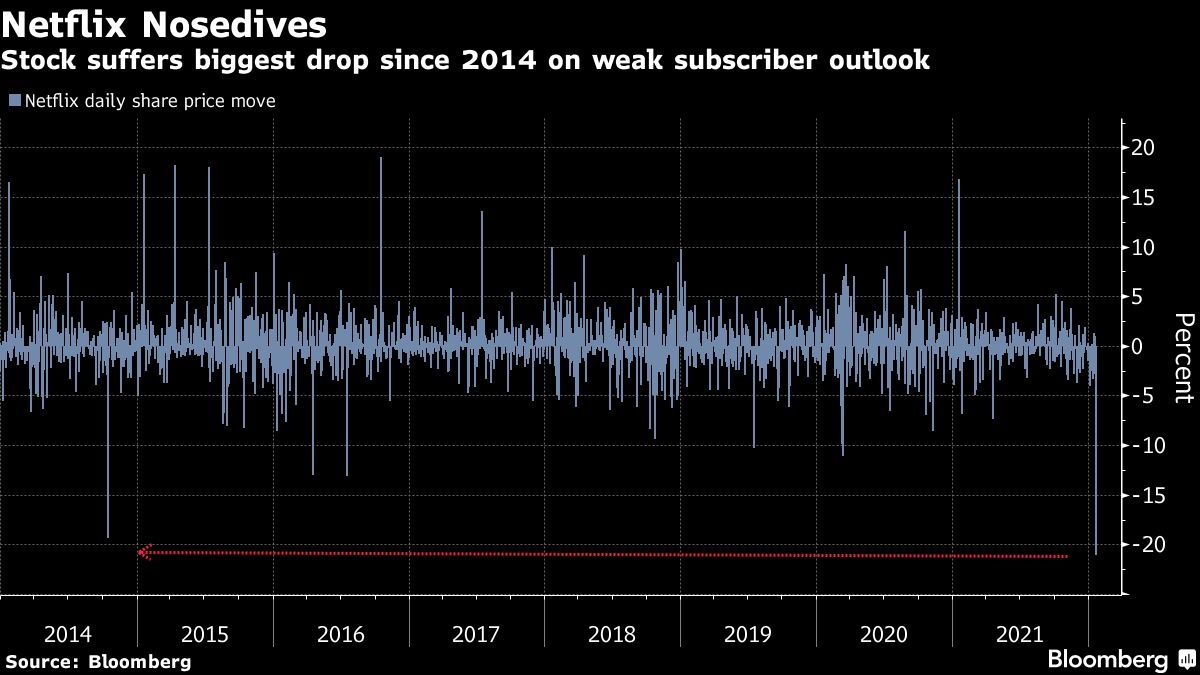 Post-earnings slumps aren’t new for Netflix investors, but Friday’s drop is set to be the ugliest share-price reaction in the session following results since after its second-quarter report in 2012, according to data compiled by Bloomberg. Shares have advanced on the day after earnings just twice out of the past 12 quarters, excluding the most recent quarter, data compiled by Bloomberg show.

In a contrarian move, long-time bear Benchmark Co. upgraded Netflix., saying the selloff appeared overdone. Netflix’s consensus rating -- a proxy for its ratio of buy, hold and sell ratings -- now stands at 3.96 out of five, down from 4.27 at the start of the week.

With Friday’s slump, Netflix shares are down more than 30 per cent in January, which is on track to be the stock’s worst month since September 2011. Netflix shares have come under pressure in recent weeks alongside technology stocks broadly with the surge in Treasury yields.