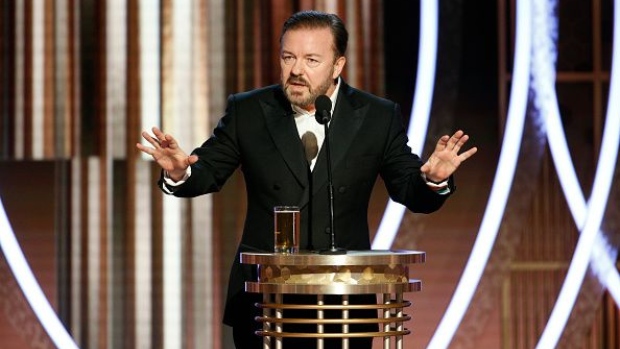 (Bloomberg) -- Less than one year after employees at Netflix, Inc. staged a walkout in response to a Dave Chappelle stand-up special, the streaming giant has released another program in which a major comedian — this time, Ricky Gervais — makes jokes at the expense of transgender people.

The special, titled “SuperNature,” debuted on the platform Tuesday. Roughly four minutes into the program, Gervais begins talking about transgender women, as well as their pronouns and bodies.

The program drew an immediate backlash from LGBTQ activists who said it promotes stereotypes and could lead to physical harm against transgender people.

“Comedians making jokes based on dehumanizing myths about transgender people have no regard for how these falsehoods fuel hate and discrimination against us,” said Alexis Rangel, a policy counsel for the National Center for Transgender Equality. “These jokes aren’t funny, and they can cause a lot more damage than just hurt feelings. They give people permission to discriminate, harass and even commit violence.”

Later in the special, Gervais says he supports trans people, and that “in real life, of course I support trans rights. I support all human rights, and trans rights are human rights. Live your best life. Use your preferred pronouns. Be the gender that you feel you are.”  He then ends with another joke about them.

Representatives for Gervais and Netflix did not immediately respond to requests for comment.

An estimated 60% of transgender students in the US say they have been targeted by discriminatory policies at school, including 28.4% who said they had been specifically barred from using the bathroom that aligned with their gender identity, the advocacy group GLSEN reported  in its 2019 National School Climate Survey.  Nearly half of respondents said they avoided gender-specific bathrooms at school because they felt unsafe.

The LGBTQ-advocacy group GLAAD in a statement decried the special’s “graphic, dangerous, anti-trans rants masquerading as jokes,” as well as Gervais’s material regarding HIV.

“Netflix has a policy that content ‘designed to incite hate or violence’ is not allowed on their platform, but we all know that anti-LGBTQ content does exactly that,” the organization said. “While Netflix is home to some groundbreaking LGBTQ shows, it refuses to enforce its own policy in comedy.”

The program follows the debut of Dave Chappelle’s special “The Closer” in October of last year. Employees voiced concerns about the material prior to its debut, and Co-Chief Executive Officer Ted Sarandos later told Deadline he had failed to communicate with employees regarding the special.

“I should’ve made sure to recognize that a group of our employees was hurting very badly from the decision made, and I should’ve recognized upfront before going into a rationalization of anything the pain they were going through,” he said at the time. He also defended the special as a matter of freedom of speech. “We are trying to entertain the world and make business decisions that are protective of creative freedom and artists and also respectful, safe workspace,” he said.

Earlier this month, Netflix  updated its company guidelines to include a section called “Artistic Expression,” Variety reported. The section notes that the streaming service will not “censor specific artists or voices” even if the material is deemed “harmful” by employees.

“If you’d find it hard to support our content breadth, Netflix may not be the best place for you,” the guidelines say.