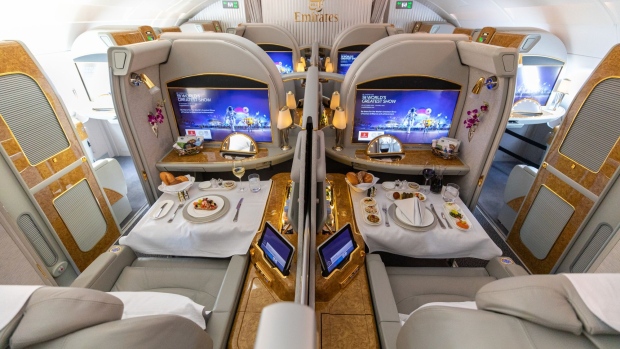 Bread and pizza inside a bakery in Rome. Photographer: Alessia Pierdomenico/Bloomberg , Bloomberg

(Bloomberg) -- At Bloomberg Pursuits, we love to travel. And we always want to make sure we’re doing it right. So we’re talking to globe-trotters in all of our luxury fields—food, wine, fashion, cars, real estate—to learn about their high-end hacks, tips, and off-the-wall experiences. These are the Distinguished Travel Hackers.

Phil Rosenthal says he has one of the best jobs in the world. He gets to travel the globe, meet new people, and eat fantastic food for his Netflix series Somebody Feed Phil, which is returning for a fifth season on May 25. It’s also been renewed for a sixth season.

“I know that viewership really expanded during Covid—my joke was that Netflix started Covid,” says Rosenthal.

Viewers stuck on their couches got to see him sip caipirinhas in Rio, visit with culinary legends Alice Waters and Thomas Keller in San Francisco, and sample the hawker markets in Singapore.

“I’m just the luckiest guy you’ll ever get to talk to,” he says. This time around he eats his way through Oaxaca, Mexico; Maine; Helsinki; and Madrid, among others.

Rosenthal gets a big smile on his face when he talks about Oaxaca and the food. “Oaxaca may not be as well-known as Mexico City, but to me it’s even more beautiful,” he says. “It’s smaller, and it’s the gastronomic center of Mexico. And for me, living in Los Angeles, it’s a three-hour flight away. You’re in another world in three hours. It’s so colorful and delightful, and the people are so warm and friendly.”

He says that when he travels, he makes it count: “That’s what money is for, saving up for these experiences that you can’t forget.”

And as for the journey itself, he tries to make it as comfortable as possible. He’ll pay for flights himself so he can have a lie-back seat, take a sleeping pill, and snooze the journey away. “There’s nothing better than waking up and hearing ‘45 minutes till landing,’ he says. “That’s the best.”

Here are some of Rosenthal’s travel tips and stories, including why Somebody Feed Phil has its roots in a 22-year-old episode of Everybody Loves Raymond. (Rosenthal was the executive producer of the CBS sitcom, which ran from 1996 to 2005.) He also details why he loves an airport lounge and the “most insane luxury” he’s ever experienced on a flight.

Ever wanted to take a shower midflight?We went to Cape Town from Los Angeles, and I chose Emirates because I heard you can take a shower on the plane. And I did. It was the most insane luxury I’ve ever experienced in my life. It wasn’t just that the water pressure was better than in my house—when I stepped out of the shower, the floor in the bathroom was heated. I couldn’t believe it. It was a once-in-a-lifetime thing. It’s insanely expensive, but to have that experience is a luxury that I wish everyone could experience.Air travel can be more comfortable outside the USI just want to go to an airport and sit in a lounge. I went to Denver last week, and even though I’m flying business or first class, there’s no lounge. You have to join the airline’s club to get into the club. I’ll find a place to eat. There’s places to sit. It’s not a tragedy that I don’t have a lounge. But I do love a lounge!

When you go to Europe or Asia or anywhere outside the United States, the lounges are wonderful. And the airlines are better because they’re subsidized by the government—the tourism starts there—both on the flight and on the airports. I wish we did more of that in the US.

There are certain American airlines that will have lounges for New York-to-LA flights, and American Express has its lounges—I’m all for it! Make travel as easy and painless as possible.

Get out of your hotel or taxi and on your feetThe moment I get off the plane, I start walking. It’s my favorite way to explore any new place—let’s see what’s around this hotel, let’s talk to the concierge and see what’s here. Where can I go for a cup of coffee? Where should I go for a quick bite to eat? What’s cool around here? I walk and walk and walk until I find a place to eat for lunch, and then I’ll walk and walk until dinner. It’s just the greatest way to see everything and experience everything. You have to walk. That’s why in the show you see me walking so much, that’s actually what I’m doing.Lisbon was a great find…A place that maybe was less well-known when we did it on the show was Lisbon. You don’t think of it at the top of your mind when you think of great European cities because there’s Rome, Paris, Barcelona, London. But when people saw that show, more people wrote to me about that city than any of the ones we’ve done. And then they went there, because they saw it! And it’s a world-class, top-tier city.

…but Italy may be his favoriteItaly may be No. 1 for me because it was the first place I went in my 20s and made friends. Have you ever been somewhere where you felt like you belonged and had a dream you could live there? That’s Italy for me. I recommend it to people for the first place to leave the United States and go.

I wanted to do an episode of Everyone Loves Raymond in Italy when I learned that Ray Romano had never been to the country. He wasn’t even interested in going. I thought we should write the episode with that attitude, so the character of Ray should have that attitude, and then he gets “woke” and travels, and he gets it! A lightbulb comes on, and that’s what I saw happen to both the character and the person.

I remember that all these years later—that was more than 20 years ago—that it was so great to turn people on to stuff you like. And I just thought: Wouldn’t it be great to do this for other people? And Somebody Feed Phil has its roots in that episode of Everybody Loves Raymond.

The most memorable hotel in ThailandThere was a hotel in Chiang Mai called the Dhara Dhevi. [It closed during the pandemic and has not yet reopened.] I ride a bicycle across the front of that hotel in the opening credits of Season 1. You can’t tell it’s a hotel—it looks like the palace from The King and I. It’s so spectacular, and that’s just the main building. Everybody gets their own house with a view of the rice paddies and the fields and the mountains and water buffaloes out your back window. It’s the most spectacular place I’ve ever been.A valuable pandemic lessonGo. If Covid has taught us anything, it’s that freedom of life, of travel, of being with other people can be taken away from us in an instant. We lived through it—some of us didn’t. It showed us how precious what we had is, this freedom to go and be with other people. It’s so important. We haven’t even begun to see the effects of what these two years have done to our collective psyche, but I do know this: As I go out more and more now, it all feels sweeter because it was taken away. To have that freedom back to enjoy life—we go around once. You gotta get out.Somebody Feed Phil returns to Netflix on May 25. Rosenthal has also launched a podcast called Naked Lunch. Somebody Feed Phil: The Book will be published by Simon & Schuster in October.