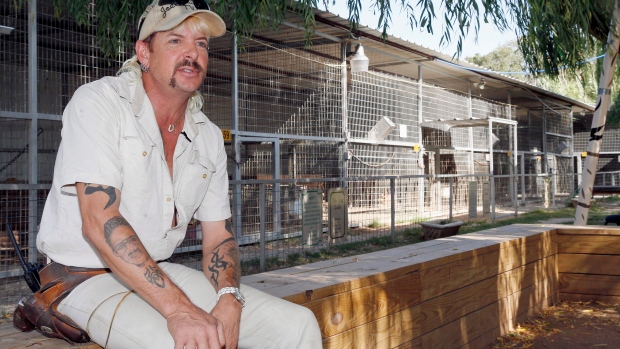 FILE - In this Aug. 28, 2013, file photo, Joseph Maldonado answers a question during an interview at the zoo he runs in Wynnewood, Okla. Federal prosecutors on Friday, Sept. 7, 2018, announced that the zookeeper, also known as "Joe Exotic," and candidate for governor earlier this year, has been charged in a murder-for-hire scheme alleging he tried to hire someone to kill a Florida woman. Prosecutors allege Maldonado-Passage tried to hire two separate people to kill the woman, who wasn't harmed. Maldonado-Passage finished third in a three-way Libertarian primary in June. , (AP Photo/Sue Ogrocki, File)

“Tiger King,” the Netflix Inc. documentary about a big-cat trainer who goes by the name of Joe Exotic, has become the runaway hit of the global pandemic, attracting 34.1 million U.S. viewers in the first 10 days after its release.

The program debuted March 20, just as much of the country was hunkering down under coronavirus stay-at-home orders. As a result, it’s become a cultural phenomenon, the subject of endless commentary on social media and fascination from comedians to Donald Trump Jr., who said he binge-watched the show in a recent TV interview.

“Tiger King” started off slow, generating just 280,000 viewers on its first day, according to Nielsen data. But the social-media buzz and promotion on Netflix’s home screen ultimately lifted it into the range of the streaming service’s other recent megahit, the third season of “Stranger Things,” which attracted 36.3 million viewers in its first 10 days last July.

In the past, Netflix has dismissed Nielsen data as unrepresentative. The company measures viewing only in the U.S., where fewer than half of Netflix’s customers live, and doesn’t track mobile devices. But Netflix has identified “Tiger King” as the most-watched show in the U.S. for the better part of the past two weeks in its own rankings.

The seven-episode “Tiger King” has captivated viewers because it combines so many classic elements of storytelling: a fierce rivalry, over-the-top characters, true crime and wild animals. Exotic, whose real name is Joseph Allen Maldonado-Passage, is serving 22 years in prison for the attempted murder of his rival, an animal-rights activist.

“With its mullets, maulings and murder-for-hire intrigue, ‘Tiger King’ and Joe Exotic have taken the streaming world by storm,” Nielsen said in a statement. “The real-life documentary featuring big cats and even larger personalities seemed to give Covid-confined consumers a way to escape from an even more real news cycle.”