Netflix is holding up better than I thought: Wedbush Securities’ Kulina on Netflix earnings

Netflix Inc. suffered its worst stock decline in three months after the streaming giant got off to a slow start in 2021 and gave a disappointing forecast for the latest quarter.

The shares fell as much as 4.8 per cent to US$505.61 on Wednesday in New York, marking the biggest decline since April 21 -- the day after another poorly received quarterly report.

The company is facing a slowdown after pandemic lockdowns sent its membership soaring in 2020, but executives sought to assure investors Tuesday that there was plenty of room to grow. The company is also looking to new offerings such as video games to keep subscribers loyal.

“Theres still a bit of choppiness to our growth,” Chief Financial Officer Spencer Neumann said in a pretaped interview with Nidhi Gupta of Fidelity Management. “Overall, the business is performing well.” 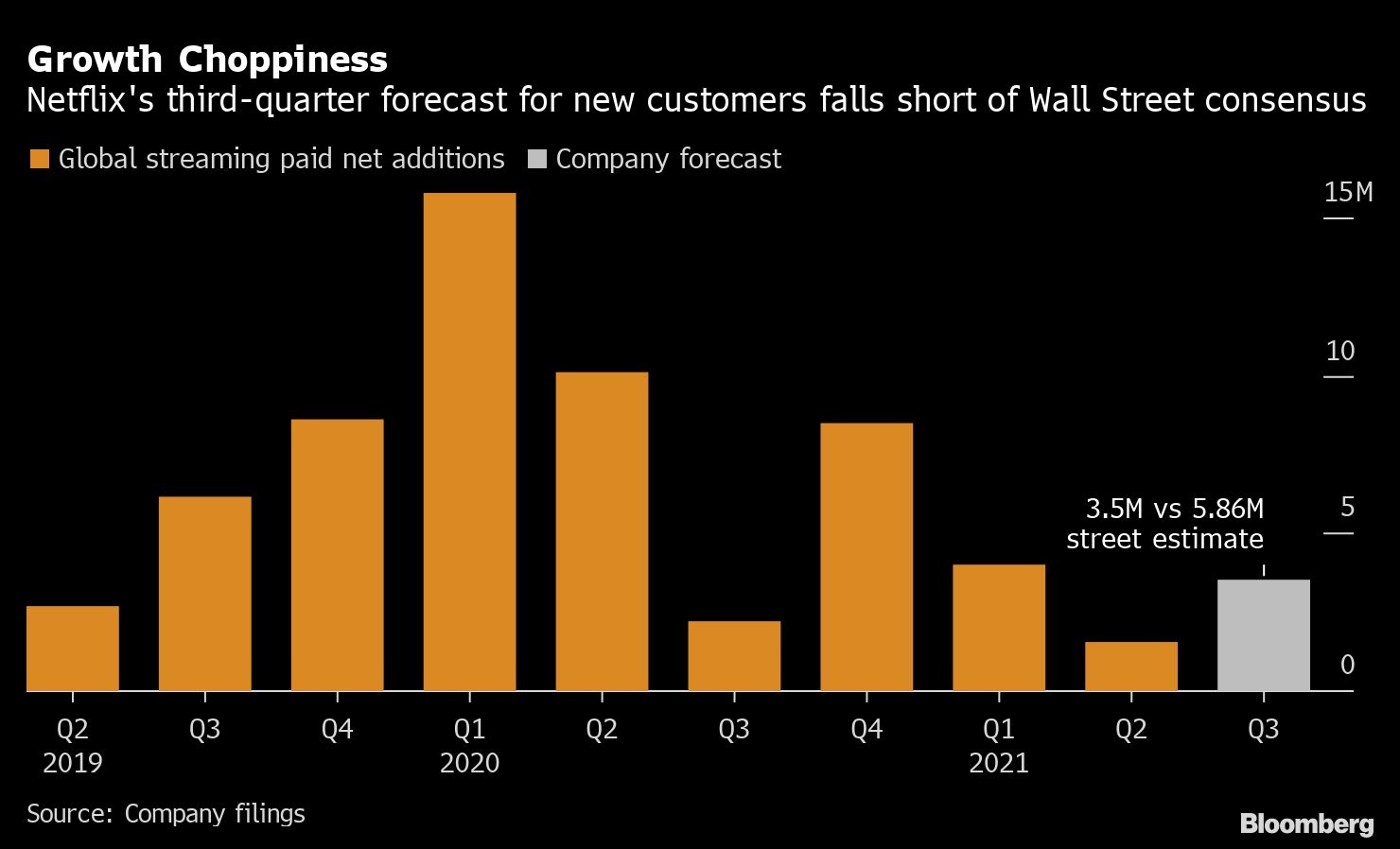 The company added 1.54 million customers in the second quarter. While that was above the 1.12 million forecast by analysts -- and Netflix’s own estimate of 1 million -- it’s a far cry from the company’s previous growth.

Paired with its additions in the first quarter, Netflix had added about 5.5 million customers -- the worst performance since the first half of 2013, when the service was operating in fewer than half as many countries.

Netflix also forecast Tuesday that it would add 3.5 million in the third quarter, well shy of the 5.86 million analysts had projected. With the pandemic subsiding, customers are watching less TV this year on average than they did a year ago, the company said.

Netflix’s top leaders acknowledged the sluggishness in 2021, while attempting to redirect attention to other numbers and new businesses that would ensure growth in the years ahead. Netflix’s users are canceling at a lower rather than they did before the pandemic, and its service has only penetrated 20 per cent of all broadband homes in the world.

Netflix, the world’s largest paid streaming service, had warned that 2021 would start slowly after record-seeing growth a year ago. The company signed up nearly 26 million new customers in the first half of 2020 as people stuck at home during the pandemic flocked to its movies and shows. Netflix surged 67 per cent in 2020 as a result.

But the slowdown in growth has been sharper than most investors anticipated. The stock was down 2.3 per cent through the first six months of 2021, the worst first half since 2016.

Two regions -- Latin America and Asia-Pacific -- accounted for almost all of Netflix’s subscriber growth in the second quarter. Those are the company’s two smallest regions. The service lost 430,000 customers in its largest region, the U.S. and Canada, the first time it has shrunk at home in two years. 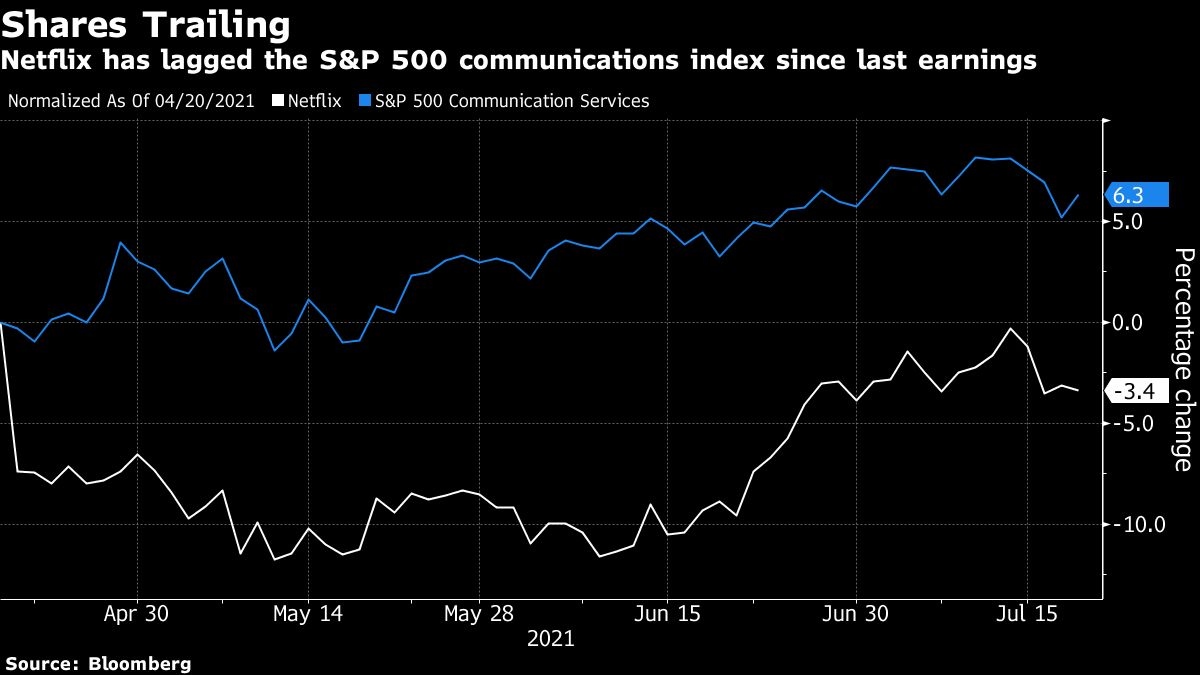 Netflix blamed its slow growth on a combination of factors: the pandemic, seasonality and a light slate of popular shows. The service had fewer big shows to offer in the first half of this year, due in part to production delays in the early months of the pandemic. The audience for two of its most popular shows, the caper drama “Lupin” and the reality dating program “Too Hot to Handle,” also fell from previous seasons.

“COVID-related production delays in 2020 have led to a lighter first half of 2021 slate that will build through the course of the year,” the company said.

Netflix is also looking to video games as a lure for current and potential customers. The company will add games to its streaming service in the next 12 months at no additional cost to its customers, and its first games will be designed for mobile devices. It will start as a test, but the effort still represents an expansion into a whole new type of entertainment.

“We are thinking about it as a core part of our subscription offering,” Chief Product Officer Greg Peters said Tuesday. Netflix will both develop games in-house and license games from outside studios, as it does with film and TV. It doesn’t view gaming -- or other new initiatives like podcasts and live events -- as substantial new businesses. They are ways of drawing more people in to its main service.

Curiosity about gaming supplanted the usual litany of analyst questions about its rivals. Netflix now faces greater competition in streaming video from Walt Disney Co., AT&T Inc.’s WarnerMedia and Apple Inc., among others. The company’s share of audience demand for original series online has dipped as new competitors have offered more shows.

But Netflix reiterated it is unfazed by competition because it believes the larger market for online entertainment will continue to grow. It also expressed little interest in large-scale acquisitions like Amazon.com Inc.’s deal for the studio MGM.

“High engagement gives the company pricing power and should quell concerns over competition,” Bloomberg Intelligence analysts Geetha Ranganathan and Kevin Near said in a report.

Even as Netflix’s customer growth has slowed, the company has boosted its sales with price increases. Revenue for the second quarter rose 19 per cent to US$7.34 billion, just above analysts’ estimates of US$7.32 billion. Earnings grew to US$2.97 a share, shy of the US$3.14 a share analysts predicted. This quarter, the company forecasts profit of US$2.55 a share, ahead of estimates, with revenue meeting Wall Street projections of US$7.48 billion.

The company initiated a program of stock repurchases last quarter and indicated it would continue to buy back more stock in the future.

inue to buy back more stock in the future.