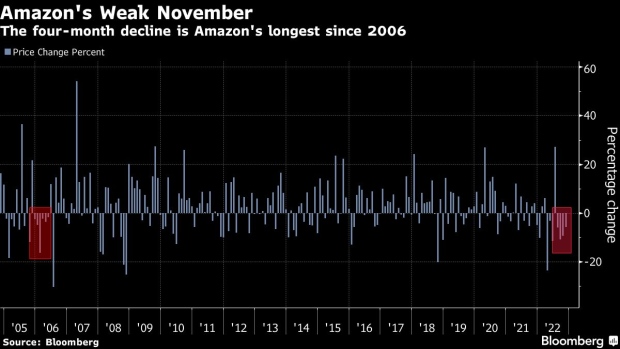 Netflix signage next to the Nasdaq MarketSite in New York, U.S., on Friday, Jan. 21, 2022. With the worst start of a year in more than a decade and a $2.2 trillion wipeout in market value, the Nasdaq Composite Index couldn’t have had a messier kickoff to 2022. Photographer: Michael Nagle/Bloomberg , Bloomberg

(Bloomberg) -- Netflix Inc.’s turnaround plan is winning over investors, who have turned one of the worst-performing stocks early this year into one of the best in the second half.

The catalyst for the comeback has been the streaming-video company’s introduction of a lower-priced, advertising-supported subscription tier, which is expected to help the Los Gatos, California-based company to attract new customers and retain old ones.

The new plan comes at a time when a high level of inflation is eating into disposable incomes at households and streaming services seem one of the first luxuries consumers are choosing to cut down on.

Netflix, which had added millions of paying users during pandemic-induced lockdowns, started losing subscribers this year. After shocking Wall Street with two consecutive earnings reports, the company pledged to take drastic steps to turn its business around: cracking down on password sharing and launching the cheaper plan with ads.

The stock plunged 72% from the start of the year to its low point in May, the biggest drop in the Nasdaq 100 Index over that period, only to surge 84% since then. The gain from the low is the third-largest in the benchmark.

This year’s woes in streaming video also have hit one of Netflix’s big competitors, Walt Disney Co., which in August said it would raise the price of its flagship Disney+ service by 38% to $11 a month and also introduce an ad-supported version. Netflix too raised the price of its standard ad-free offering, boosting it in January by about 11% to $15.49 a month in the US, and later said the increase was one of the factors that caused it to lose customers.

Netflix traded at an average of about 79 times forward earnings over the past decade as it built a cult following around shows such as Tiger King and Stranger Things. While it’s still not cheap by any means, now it’s valued at about 27 times.

“Valuations got ahead of themselves, with pandemic success stories like ‘Tiger King’ helping add millions of new subscribers,” Edmondson said.

About a year ago the company had hit a record market value of $306 billion. Despite its recent rally, the stock is still down 49% this year and is valued at about $136 billion.

The company’s turnaround plan also seems to have won over some analysts. The stock now has 22 buy recommendations, 24 holds and 4 sells, according to Bloomberg data. This is up from 16 buys, 29 holds and 7 sells as of June 30.

“Netflix managed to create a smooth viewing experience that is less disruptive than we expected, and we think this offering should be able to gain traction with consumers,” Mark Mahaney, an analyst at Evercore ISI, said in a note in mid-November.

Mahaney, one of the analysts who upgraded the stock in recent months, said he remains confident in his initial forecast that the basic plan with ads could generate 10 million new subscribers and $1 billion to $2 billion in additional revenue for Netflix by 2024.

“The revenue growth from this new tier within Netflix’s subscription service will likely be a growing process over the next few years, but by 2025, the global ad growth could be much more significant and account for a significant fraction of the company’s total revenue,” said Pedro Palandrani, director of research at Global X ETFs. “Considering some users will switch to the ad-support tier and some will return to Netflix, this move is about retaining users just as much as it is about signing up new ones.”

While Amazon.com Inc. rose 4.5% Wednesday, that wasn’t enough to erase a lengthy stretch of monthly declines for the e-commerce and cloud-computing giant. The stock fell 5.8% over the month of November, its fourth straight negative month. That represents the longest such streak since a six-month stretch of declines that ended in May 2006. The stock, which has fallen 42% this year, was trading up 1.9%.

--With assistance from Tom Contiliano and Ryan Vlastelica.