Netflix Estimates ‘Squid Game’ to Be Worth Almost $900 Million

Netflix Inc. posted its strongest subscriber growth of the year, beating Wall Street estimates thanks to the popularity of “Squid Game,” its breakout drama from South Korea.

The company added 4.38 million subscribers in the third quarter, according to a statement Tuesday, exceeding projections of 3.72 million. Netflix expects to sign up 8.5 million customers in the final three months of 2021, compared with Wall Street estimates of 8.32 million.

September’s busy program slate changed the course of the year for Netflix. The service added just 5.5 million customers in the first six months of 2021, the least since 2013. Analysts had worried the slowdown would drag on after July and August passed without the return of popular shows. But new seasons of “La Casa de Papel” and “Sex Education,” as well as “Squid Game,” a show about a deadly contest, brought in millions of new customers. 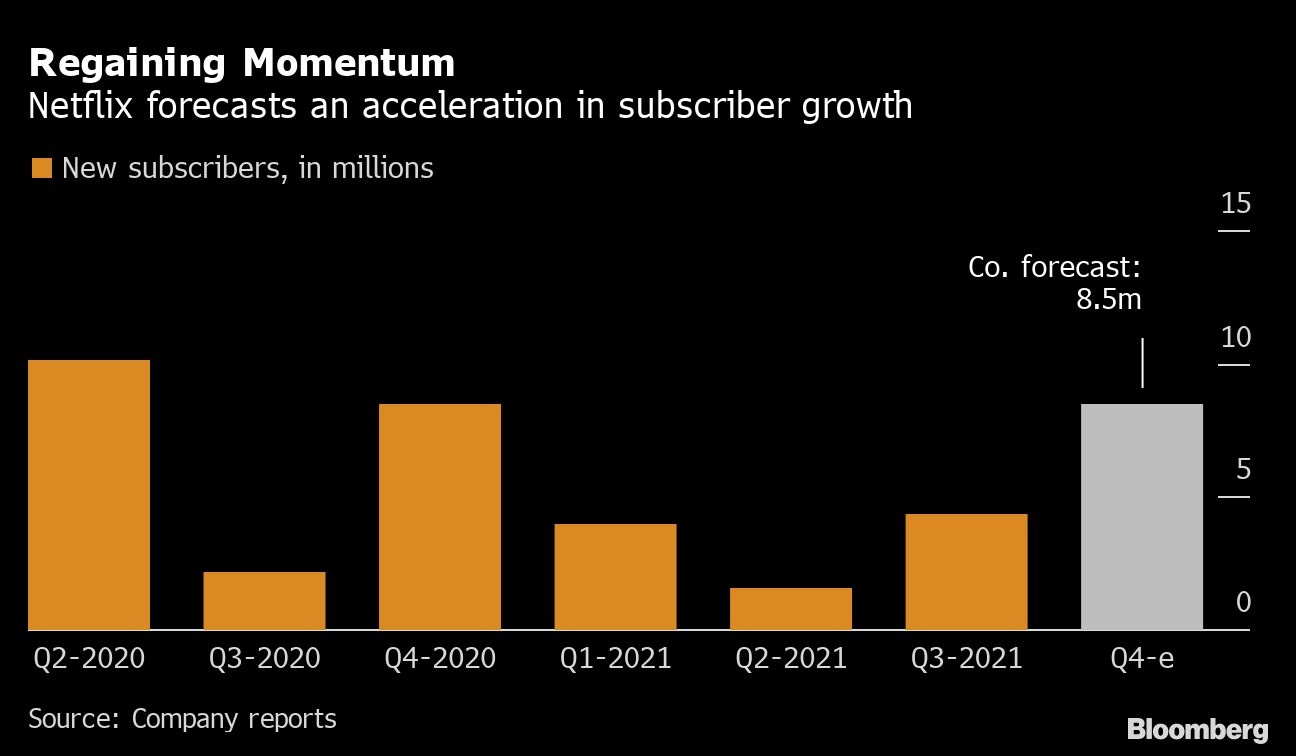 About 142 million member households started watching “Squid Game,” making it the most-viewed new show in Netflix history. The company is on pace to add more than 18 million customers this year, though that’s the least since 2016.

Shares of Netflix were down slightly in extended trading after the results were announced. The stock has been on a tear lately as investors’ hopes for faster growth took hold, rising 34 per cent from its 2021 low in May.

The question for investors is whether Netflix can sustain its growth in Asia and Europe in the years ahead.

Those two regions supplied most of the new customers in the quarter, pulling in almost 4 million subscribers. Asia has been Netflix’s fastest-growing territory in recent months, and “Squid Game” bolstered that trend. Europe, the Middle East and Africa had been the fastest-growing market the past couple years. The company is investing millions of dollars in productions for South Korea, India and Japan, as well as Africa.

What Bloomberg Intelligence Says:
“The subscriber beat provides momentum into 4Q and affirms our confidence in Netflix’s strategy and execution in creating local-language originals that can resonate globally.”
-- Geetha Ranganathan, senior media analyst

“We are now producing local TV and film in approximately 45 countries and have built deep relationships with creative communities around the world,” the company said.

Netflix didn’t address the controversy over comedian Dave Chappelle’s jokes about gay and trans people in a new stand-up special. It has spawned worker unrest and the leak of company documents. Some of Netflix’s creative partners planned to protest outside of its Hollywood offices Wednesday in solidarity with those communities.

Investors have worried that competition will slow or even reverse Netflix’s growth, but the company has insisted it has plenty more to grow. Netflix has already proved its skeptics wrong on many other points. It said it will be cash flow positive next year and annually moving forward, and it has started to make popular shows and movies in house, in addition to the outside producers.

Netflix estimates it can reach 450 million customers or more all over the world. For that to happen, it will need to sign up customers in poorer countries since its growth at home has slowed. Just one quarter after losing 430,000 customers in the U.S. and Canada, Netflix added 70,000 subscribers. The company started testing a free plan in Kenya that it hopes can entice people to upgrade to a full subscription.

Big movies portend a big end to the year. Netflix has a deep slate of films with big names arriving in the next couple months, including “Red Notice,” starring Dwayne Johnson and Ryan Reynolds, and “The Power of the Dog,” featuring Benedict Cumberbatch and Kirsten Dunst.