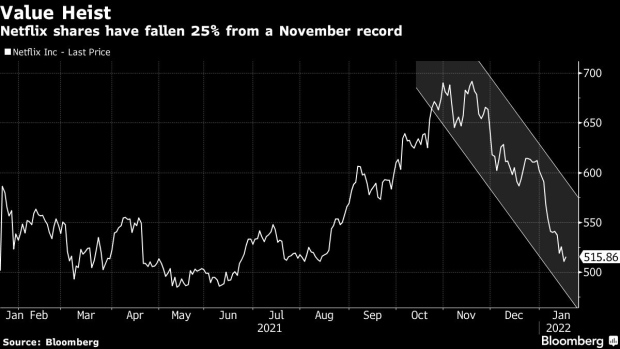 (Bloomberg) -- Netflix Inc.’s stock has been the gift that keeps on giving since 2002. Now, with a pandemic-era surge in user sign-ups fading away and investors turning impatient due to rising bond yields, the stakes have never been higher as fourth-quarter earnings loom.

The bad news is, the closely watched subscriber additions are pointing to a miss. The movie and show-streaming service probably added 8.1 million customers in the December quarter, according to the average of analyst estimates compiled by Bloomberg. That would fall short of Netflix’s forecast for growth of 8.5 million.

Rival services from the likes of Walt Disney Co., Comcast Corp. and ViacomCBS Inc. are taking a toll.

Improving content from a wide variety of platforms this year will underscore the “increasingly competitive nature and current low return profile” of the streaming business, according to MoffettNathanson analyst Michael Nathanson, one of the eight analysts tracked by Bloomberg with a neutral-equivalent rating on Netflix.

At stake is Netflix’s near-mythic status among growth investors, earned by a two-decade run of stock performance: The shares have gained more than 48,000% since the company’s 2002 initial public offering, equal to 37% a year. That’s in line with Apple Inc.’s return over the same period and far outpaces Microsoft Corp.’s.

Among other growth stocks with cult followings, Facebook owner Meta Platforms Inc. and Alphabet Inc., which went public after Netflix, have posted much smaller returns. Only electric-vehicle giant Tesla Inc. has done better, rising 63% annually in 12 years as a listed company.

UBS Group AG’s John Hodulik is among analysts predicting that Netflix’s subscribers will fall short of estimates after “momentum faded” throughout the quarter, a sign the industry is still digesting outsized growth from the pandemic. The streaming giant reports earnings after the U.S. market close on Thursday.

Investors have likely priced in some disappointment. The stock has lost 15% in 2022 alone, a much steeper decline than the Nasdaq 100 Index and most of its high-growth peers. Netflix’s price-earnings ratio has dropped from 54 last year, but the stock remains expensive at 39 times forward earnings vs 26 times for the technology companies in the S&P 500.

What’s more, the popularity of Netflix’s programming slate -- historically the harbinger for subscriber gains -- hasn’t worked either. Hot offerings like the Leonardo DiCaprio film “Don’t Look Up,” as well as new seasons of “Emily in Paris” and “Money Heist,” haven’t managed to boost investor sentiment this time around.

Disney and Roku Inc. have also seen their stocks take a beating after benefiting from a surge in streaming over the past two years. Disney has lost a quarter of its value since a March record and Roku is down more than 65% from a July high.

Netflix’s post-earnings move perhaps could have implications for the direction of the wider market, since it’s the first major tech, media and telecommunications company to report earnings. The Nasdaq 100 is down more than 9% since mid-November on rising yields.

After the broader Nasdaq Composite Index’s 10% correction from top on Wednesday, the Nasdaq 100 looks poised to do the same. The tech-heavy benchmark took a similar beating in March 2020, but bounced back right after. This time it could be different as the speed of travel in yields points to more interest rate hikes by the Federal Reserve.