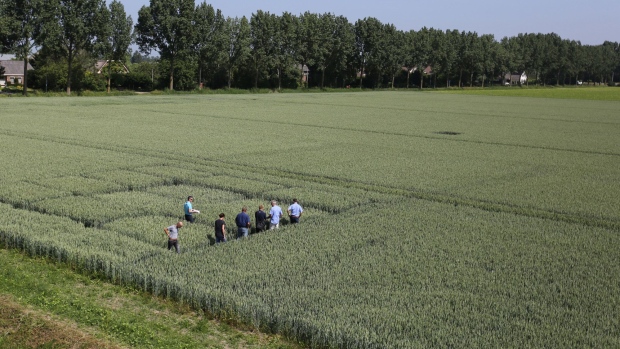 A group of Bayer AG employees stand in wheat field as they inspect the crop conditions on a farm in Abbenes, Netherlands, on Wednesday, June 6, 2018. After waiting more than 18 months for the Monsanto Co. acquisition to close, Bayer AG may not delay selling bonds after the purchase completes on Thursday. Photographer: Yuriko Nakao/Bloomberg , Bloomberg

(Bloomberg) -- The Netherlands laid out plans to buy out hundreds of farms near nature reserves, an attempt to quell the fury of Dutch farmers over its goal of halving nitrogen emissions by 2030.

The government will acquire large nitrogen emitters as part of a voluntary and one-time offer, said Nitrogen Minister Christianne van der Wal-Zeggelink in a letter to the parliament in the Hague. The cabinet has set aside €24.3 billion to fund the transition.

The target, designed to comply with European Union rules on reducing nitrogen pollution, prompted uproar among farmers shortly after it was first presented in June. If implemented, the government’s plan would require cuts of as much of 95% in emissions in some provinces and see the livestock population in the Netherlands reduced by a third over the next eight years.

The protests drew global headlines this summer as farm-owners brought their cows to the Hague, blocking roads and prompting the agriculture minister to quit.

If not enough farmers sell their businesses, then the government may have to force some of them out of business, Prime Minister Mark Rutte said in a press conference on Friday.

The Netherlands is the second-largest exporter of agricultural products, with estimated exports of 104.7 billion euros ($111 billion) in 2021, according to Wageningen University. Cattle and fertilizers are key sources of nitrogen emissions.