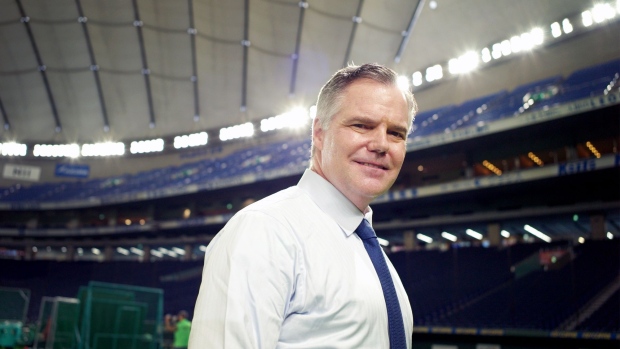 Jim Murren, chairman and chief executive officer of MGM Resorts International, poses for a photograph following a Bloomberg Television interview in Tokyo, Japan, on Thursday, March 21, 2019. MGM Resorts plans to focus on a bid to build a casino in Osaka, where the city government will likely choose the winning bid around March 2020, Murren said. Photographer: Kentaro Takahashi/Bloomberg , Bloomberg

(Bloomberg) -- Las Vegas is America’s gambling playground, and one of the casino industry’s highest-stakes games is partisan politics.

Some of the biggest names on the Strip -- Las Vegas Sands, Wynn Resorts and Red Rock Resorts -- have ties to Republicans through donations or high-profile political involvement by executives such as Las Vegas Sands Corp. Chairman Sheldon Adelson.

But a deluge of California transplants and a growing population of Latinos and Asians, many of whom work in the industry, are transforming Nevada politics -- and with it the casinos, some of which are putting more of their chips on Democrats.

“On the issues we care deeply about at a corporate level -- diversity and inclusion, sustainability, community engagement -- we have found more of an alignment with the current Democratic officials,” MGM Resorts International Chief Executive Officer Jim Murren said in an interview, while pointing out that the company also supports Republicans in tune with its interests.

Democrats are trying to shift Nevada from a swing state to one solidly in their column. Former President Barack Obama won the state twice, and in 2016 Nevada went for Clinton over Trump.

The party scored major gains there in the 2018 midterm elections, winning the governor’s office and a U.S. Senate seat, among other posts. Both Senate seats are now in the hands of Democrats as well as three of the state’s four congressional districts, and both houses of the Legislature.

The state may play a pivotal role in the Democratic nomination race. It will hold its presidential caucus next Feb. 22, the third in line after the Iowa caucuses and the New Hampshire primary.

Nevada’s two largest employers are Murren’s MGM and Caesars Entertainment Corp., and both have given more to Democrats than Republicans in recent elections. MGM’s political action committee has donated $404,690 to Democratic candidates since 2009, twice as much as it gave to Republicans. Caesars favored Democrats in five of the past six election cycles, giving them $700,799 compared with $449,821 for GOP candidates.

Overall, the political action committees of the six biggest Las Vegas-based casino companies by market capitalization favored Democratic candidates slightly over the GOP in 2018, $307,500 to $295,500, even though the party held no levers of power in Washington.

Even Wynn Resorts, whose founder and former chairman, Steve Wynn, was chosen to lead the Republican National Committee’s finance committee in 2017, tilted modestly to Democrats last year after Wynn’s departure from the company amid sexual misconduct allegations.

Wynn Resorts’ PAC, which went seven years without making a contribution to a Democrat, gave $10,000 to Democrats in 2018 against $8,500 for Republicans. Through a spokeswoman, Wynn Resorts declined to comment, and an attorney for Wynn, who has denied the allegations against him, didn’t respond to requests for comment.

Casinos are responding to the overwhelming electoral success of the Democratic Party in recent Nevada elections and the fact that Democrats are increasingly aligned with their interests, Representative Dina Titus said in an interview.

“You start talking about building walls and Muslim bans and that starts to cut into their growing market, which is based on international tourism,” said Titus, a Democrat whose district includes the Las Vegas Strip. At the same time, the industry’s workforce, like the state’s population, is changing rapidly, she said, adding that Las Vegas’ potent unions are also playing an important role.

In terms of sheer dollar value, the casino industry’s giving patterns at the federal level are skewed by the contributions of a single individual donor -- Adelson, who with his wife, Miriam Adelson, has given $205.8 million, most of it to super-PACs that support Trump and Republican House and Senate candidates, in the past two election cycles, according to the Center for Responsive Politics.

Adelson’s Las Vegas Sands matches the boss’s preferences: Its political action committee has distributed $344,132 to federal politicians since 2009, with just $8,500 going to Democrats. The company didn’t respond to an email seeking comment on its and Adelson’s political giving.

Richard Broome, executive vice president for communications and government relations at Caesars Entertainment, said the company regards Nevada as a purple state and backs both Democratic and Republican politicians who are in tune with its interests. He cited the support of Caesars and other companies of Republicans, including Brian Sandoval, the former governor, and Dean Heller, who was the only GOP senator to lose his seat in the 2018 elections.

“We believe there’s strong recognition among all elected officials in Nevada of the importance of tourism, gaming and hospitality to the state’s economy and jobs,” Broome said. “We’re able to work effectively across both sides, and we’ve found that politicians on both sides are supportive of our issues.”

Representative Susie Lee, a Democrat whose district is just south of Las Vegas, said she thinks Nevada is still potentially a swing state.

“I don’t view what happened in 2018 as a sign that we are a completely blue state yet,” Lee said in an interview. “Nevada voters are not shy about switching votes if they believe there’s a candidate who’s going to deliver for them.”

Lee said she hasn’t decided yet which Democrat to support in next year’s presidential election.

“I’m focused on who calls me and asks about the needs of my district,” she said. “When they call, they go up in my estimation.” So far, Lee said, she has heard from candidates including Biden, Kamala Harris, Beto O’Rourke and Elizabeth Warren.

Murren says his company maintains a commitment to bipartisanship despite the tilt toward Democrats in its campaign contributions. MGM funds a public policy institute at the University of Nevada Las Vegas of which former Senate Majority Leader Harry Reid, a Nevada Democrat, and former House Speaker John Boehner, a Republican, are co-chairs. And MGM recently hired former governor Sandoval as its president of global gaming development.

Casinos are responsive to demographic and other factors that are making Nevada bluer, according to Sig Rogich, a Las Vegas-based Republican political consultant who served as an aide to President George H.W. Bush. Yet like the state’s voters, he said, they’re most closely attuned to politicians who share their interests.

“I don’t think the casinos are choosing sides, per se, but I do think they know who has their interests at heart,” Rogich added. “It’s mostly defined by how well their special interests have been met.”

To contact the reporters on this story: Jeffrey Taylor in San Francisco at jtaylor48@bloomberg.net;Bill Allison in Washington at ballison14@bloomberg.net

To contact the editors responsible for this story: Joe Sobczyk at jsobczyk@bloomberg.net, John Harney