In a rare turn of events, once-loved Canadian bank stocks are no longer the favourites. Instead, investors are turning their attention to the country’s life insurers.

In 2019, shares of the Canada’s largest lenders gained 14 per cent, including dividends, lagging the S&P/TSX Composite’s 23 per cent total return -- the first time they have trailed the benchmark since 2010. Banks have struggled to eke out strong earnings results as rising loan losses and eroding net interest margins hurt their profitability amid economic growth concerns. That pushed analysts to temper their forecasts for 2020.

The banks were performing very well until September 2018, “and then the bloom went off the rose,” said John Kinsey, a portfolio manager at Caldwell Securities Ltd. in Toronto. Some investors have soured on banks because of concerns about declining interest rates, mortgage quality and high levels of consumer debt, which are a risk to the economy.

“The focus changed to the insurers because they hadn’t done well when the banks were performing at their peak,” he said.

“Lifeco stocks outperforming bank stocks is an unusual occurrence, with back-to-back annual outperformance an even rarer outcome,” Gabriel Dechaine, an analyst at National Bank of Canada, said in a Jan. 28 report. “As long as growth concerns for the banks remain intense, this trend could continue.”

When lifecos release fourth-quarter results next week, analysts are expecting them to show a strong finish to 2019. RBC Capital Markets analyst Darko Mihelic expects they will report a “solid end to a good year with double-digit core EPS growth forecast for all of the lifecos,” reflecting strong equity market performance in the quarter.

Investors are betting on insurers after taking a cautious view of the Canadian economy as it suffers a bout of sluggish growth. Traders are anticipating at least one Bank of Canada interest rate cut this year, according to data compiled by Bloomberg, which could continue to hurt the bottom line for banks. 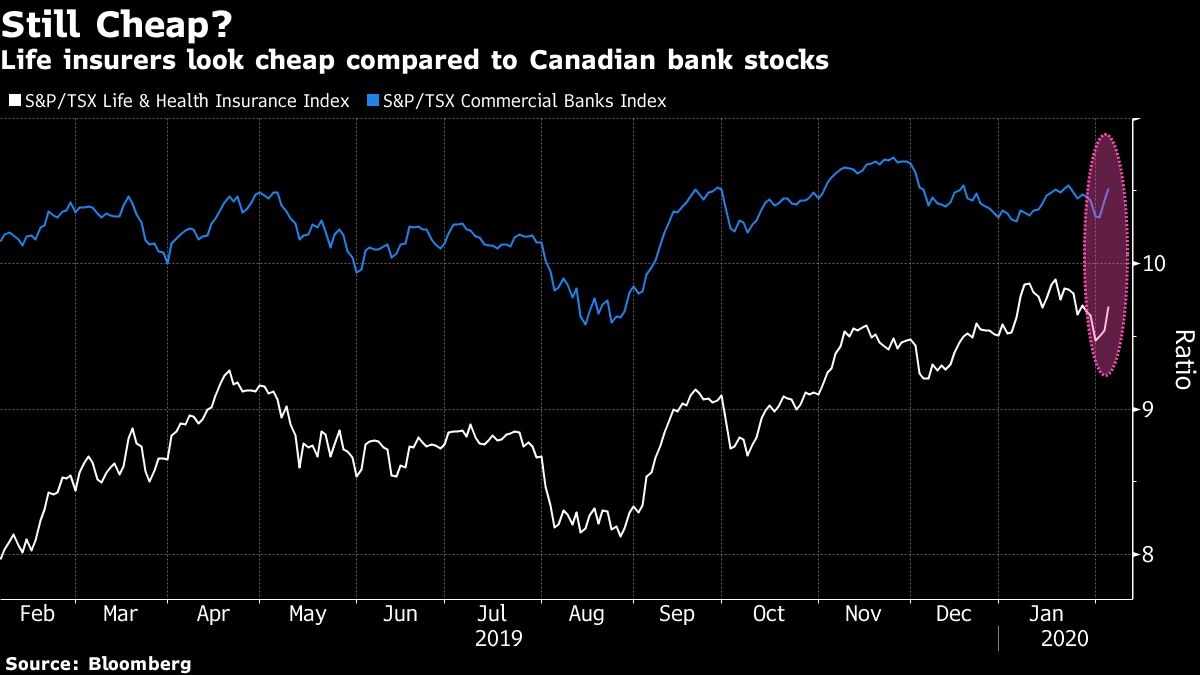 Lower interest rates due to a potential economic downturn can also have a negative impact on insurers. But the largest Canadian lifecos have significant exposure to businesses outside of their home market. Manulife generated about 62 per cent of its 2018 revenue internationally, while Sun Life made almost 45 per cent of its sales in Asia and the U.S., according to Bloomberg data.

“The relatively higher earnings generation outside of Canada that lifecos offer could become more appealing,” said National Bank’s Dechaine. He also expects them to prioritize share buybacks since several of the companies have “material amounts” of cash.

As their shares rally, valuations for Canadian life insurers are almost on par with banks. The price-to-earnings ratio for Canadian life insurers sits at 9 times compared to banks at 10 times, but Dechaine warns that the comparison is skewed by Manulife, which is the cheapest stock in the group. Once Manulife is excluded, “the sector is trading inline to historical averages and to the Big Six,” he said.