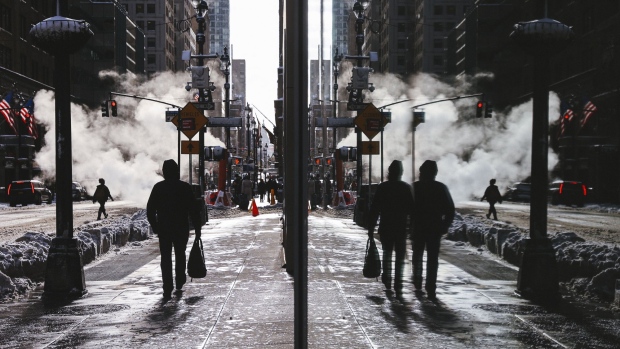 Pedestrians walk on a street after a winter storm in New York, U.S., on Thursday, Dec. 17, 2020. Winter Storm Gail pounded the city as temperatures dropped to 27 degrees with frigid sustained winds up to 35 mph, making dining outdoors unbearable amid the Covid-19 pandemic that has already crippled the restaurant industry. Photographer: Angus Mordant/Bloomberg , Bloomberg

(Bloomberg) -- One of the most adored sectors of the $5.7 trillion exchange-traded fund industry was also one of the hardest hit as technology stocks plunged last week.

Funds focused on specific market niches raked in piles of cash in the first two months of the year, a trend that’s poised to rapidly accelerate, according to a new survey. A whopping 80% of global ETF investors plan on increasing their exposure to so-called thematic ETFs this year, Brown Brothers Harriman & Co. found in their annual report released Monday.

Such products attracted more than $32 billion in January and February, by far their best start to a year, according to data compiled by Bloomberg. Cathie Wood’s actively-managed funds at Ark Investment Management have revolutionized the thematic space, gaining fans among both institutional and retail traders. As new investors flood the market, ETFs based on understandable and relatable narratives continue to win fresh money.

“They’re seeing remarkable interest,” said Ryan Sullivan, senior vice president of Brown Brothers Harriman’s global ETF services. “It’s the chicken and the egg to a certain extent -- are investors following some highly touted performance by some managers in this space or is there a long-term play here with changes around how portfolios are being designed?”

That love was put to the test last week as many thematic funds -- which can track sectors like electric vehicles, disruptive technology and genomics -- faced rapid drops. Rising Treasury yields are spurring caution toward growth stocks that are more sensitive to interest rate changes.

The study’s respondents -- almost 400 institutional investors, financial advisers and fund managers from the U.S., Europe and China -- said they were most interested in internet and technology thematic funds, followed by those focused on robotics and artificial intelligence.

“What we’re most interested in is to see what the staying power is for thematic ETFs,” Sullivan said. “If performance turns and we go through a year or two year where it’s a little bit more mixed, will we see this interest die off a bit or will we see these hold their own?”

A poster child for thematic funds’ success is Wood’s Ark, which has taken in $16 billion so far in 2021. However, all five of the firm’s actively-managed products including Ark Innovation ETF (ARKK) fell last week.

Actively-managed ETFs -- still a small portion of the $5.8 trillion industry -- are also winning over investors, with 65% of respondents planning to increase their exposure, up from 57% in last year’s survey. Fixed income and global equities are the most popular strategies in the active wrapper.

More than half of the U.S. investors also said they would buy a semi-transparent, active ETF in the next six months. The first of this new breed of products launched about a year ago, but have been relatively slow to attract investors. The largest, the Fidelity Blue Chip Growth ETF (FBCG), has only about $270 million in assets.

Among the other findings: