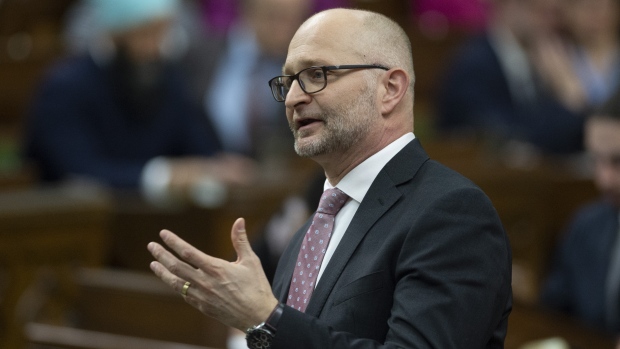 Minister of Justice and Attorney General of Canada David Lametti responds to a question during Question Period in the House of Commons Thursday April 4, 2019 in Ottawa. , The Canadian Press

OTTAWA -- Attorney General David Lametti says he will resist any attempt to pressure him on the SNC-Lavalin criminal prosecution.

Lametti is now in the hot seat on the court case that has rocked the Liberal government, resulting in the resignations of two cabinet ministers, the prime minister's most trusted adviser and the country's top civil servant.

The director of public prosecutions decided last fall not to negotiate a deferred-prosecution agreement with SNC-Lavalin, which is facing charges of bribery, and former attorney general Jody Wilson-Raybould says she was inappropriately pressured by Prime Minister Justin Trudeau and his senior staff to overrule that decision.

She believes she was shuffled out as justice minister and attorney general in January because she would not intervene, though the prime minister denies that had anything to do with her move.

Wilson-Raybould resigned from cabinet altogether Feb. 12, a day after Trudeau said her continued presence there, several days after her concerns about interference were first reported, spoke to her support for and confidence in the government.

However it is now alleged Wilson-Raybould set several conditions for her to remain in cabinet, including the firings of both Trudeau's principal secretary Gerald Butts and Privy Council clerk Michael Wernick, the country's top public servant.

Unidentified sources tell both the Toronto Star newspaper and CBC News that Wilson-Raybould also wanted a commitment Lametti would not step in to negotiate a remediation agreement with SNC-Lavalin.

Wilson-Raybould hasn't responded to a request for comment on the claims.

On his way into question period Thursday, where the SNC-Lavalin saga dominated the House of Commons again, Lametti said if that conversation happened between Wilson-Raybould and Trudeau, Lametti was unaware of it.

That said, Lametti added he will not allow anyone to direct his decision on the matter one way or the other.

"The prime minister has never tried to direct me," said Lametti. "If someone else tries to direct me then they'll hear about it."

He said he wouldn't comment on the details of the SNC-Lavalin case, but said he did receive "routine briefings" related to it when he became the minister. His spokesman confirmed to The Canadian Press that those briefings included a breakfast meeting with some of Trudeau's aides.

That meeting mainly went over the contents of the briefing book that was prepared for Lametti by his department, said Lametti's spokesman, David Taylor. The book does not specifically mention SNC-Lavalin or the case against the company for bribing officials in Libya to secure contracts there. It does mention remediation agreements, a new tool introduced into law by the Liberals last year that allows companies with employees caught bribing foreign officials to put off a corporate prosecution in exchange for agreeing to pay fines and restitution and accept outside monitoring.

In a conversation between Wilson-Raybould and Wernick just before Christmas, which Wilson-Raybould recorded, she indicated that she believed any attempt to offer SNC-Lavalin a remediation agreement would be construed as political interference in the justice system.

She said that rightly or wrongly, some believed the remediation-agreements law was tailored to help SNC-Lavalin and that to have the attorney general override the public prosecutor would be badly received.

Liberal MP Wayne Easter, who said he doesn't think any of the conversations between Wilson-Raybould and Trudeau, Wernick or Trudeau's staff put any inappropriate pressure on her, also said if Wilson-Raybould wanted to ensure Lametti didn't take a specific action on the case that would be wrong.

"What she is basically saying is the prime minister should order the new attorney general to do such-and-such on SNC-Lavalin," he said. "Isn't that a contradiction and that does shock me."

NDP Leader Jagmeet Singh rejected that interpretation of the conversation, arguing this is "another attempt to smear Ms. Wilson-Raybould."

He said all she was doing was telling Trudeau and his office not to interfere.

Conservative Leader Andrew Scheer agreed, saying he doesn't put much faith in the leaked conditions, but that that one sounds more like she just wanted a commitment that the prime minister would not interfere in this case at all.