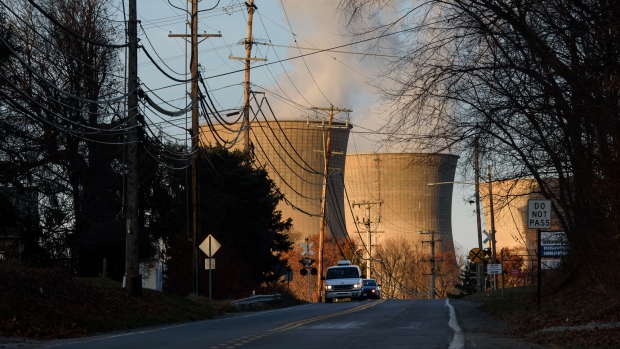 Vehicles drive along a road near the FirstEnergy Corp. Bruce Mansfield coal-fired power plant in Shippingport, Pennsylvania, U.S., on Sunday, Dec. 3, 2017. Across America, few places are as dominated by big, centralized power plants as Shippingport. It was here, in the 1950s, that the federal government teamed up with private industry to build the country's first nuclear power plant. , Bloomberg

SAINT JOHN, N.B. -- A new alliance has been formed to promote the development of small nuclear reactors and other energy technologies in Atlantic Canada.

"The point of the alliance is to look at developing clean energy technology here in New Brunswick and standing up to say this is a really good place to do that," said Colleen d'Entremont, president of the Atlantica Centre for Energy, an industry association that is also part of the alliance.

"In order to reach those targets something has to change," d'Entremont said. "We have to invent something, commercialize something or get something approved that does not exist today."

ARC and Moltex have both set up offices in Saint John in their effort to develop small modular reactors.

New Brunswick, Saskatchewan and Ontario signed a memorandum of understanding in December regarding development of the small modular reactor technology in Canada. Canada and the United Kingdom are expected to sign a similar agreement next month.

It is expected to take about 10 years to get a demonstration project up and running. The intention is to then market it around the world, particularly in remote areas.

The federal Green party criticized the plan announced by the three provinces in December, saying the money would be better spent developing solar, wind and small-scale hydro power. "Gambling with risky investments like modular nuclear reactors, particularly with public money, is not the path forward," Green MP Jenica Atwin, who represents Fredericton, said at the time.

D'Entremont said she expects the new alliance to quickly expand to encompass other technologies such as wind, solar and hydro from across Atlantic Canada.

"We have to look at how we can change our behaviours in order to reduce emissions, and it can't be just by changing light bulbs and insulating our attic. We are beyond that stage. Now we have to look at new technology being developed that does have zero emissions," she said.