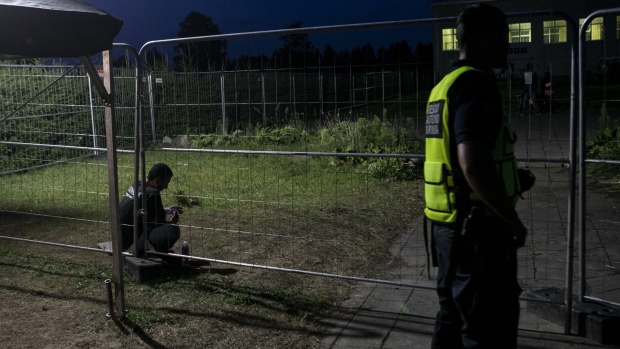 VYDENIAI, LITHUANIA - JULY 29: Migrants detention centre in old school, there about 150 of them are staying, mostly from Ivory Coast, Cameroon, Somalia, Eritrea and Senegal on July 29, 2021 in Vydeniai, Lithuania. More than 3000 migrants have been intercepted for illegally crossing the Lithuanian border from Belarus. The Lithuanian government has accused the President of Belarus, Alexander Lukashenko, of illegally allowing refugees from the Middle East trying to reach Europe to pass through its borders. (Photo by Paulius Peleckis/Getty Images) , Photographer: Paulius Peleckis/Getty Images Europe

(Bloomberg) -- Lithuania will decide Tuesday on whether to build a 508-kilometer (316-mile) long fence on its border with Belarus to stop an unprecedented wave of migrants pouring into the European Union’s east.

The arrivals are part of Belarusian President Alexander Lukashenko’s strategy to retaliate against EU sanctions against his government over his crackdown against pro-democratic opposition, Lithuanian officials said. Lukashenko denies these allegations.

He has threatened to stop policing the flow of drugs, guns, people and nuclear material to the EU. Lithuania, which along with neighbor Poland is sheltering dissidents fighting to unseat Lukashenko, has taken the brunt. More than 4,000 people, mainly from Iraq, have crossed into Lithuania since June, 50 times more than in all of 2020.

“Lukashenko is using migration as a weapon,” Lithuanian President Gitanas Nauseda told Bloomberg News on the weekend. “This is a hybrid campaign by Lukashenko against the EU and the integrity of its eastern border.”

If the government in Vilnius approves the 152 million euro ($179 million), it will add to barriers that have risen in Europe since 2015, when millions of Middle Eastern and African migrants came to the continent.

During a visit to the Lithuanian Belarus border, EU’s Migration and Home Affairs Commissioner Ylva Johansson called the situation “an act of aggression from the Lukashenko regime and not a migration crisis.” Frontex, the EU’s border agency, is also sending emergency assistance.

Latvia’s prime minister and interior minister are calling for state of emergency to be declared on Belarus’s border after a surge of arrivals, according to the Leta news service.

Lukashenko has also threatened to stop checks on illegal nuclear material heading for the EU, saying that after thwarting as many as six smuggling attempts last year, it would be allowed to flow unhindered. He also denied directing migrants to the EU frontier.

“I didn’t send them there,” he said on Monday in Minsk. “The EU invited them.”