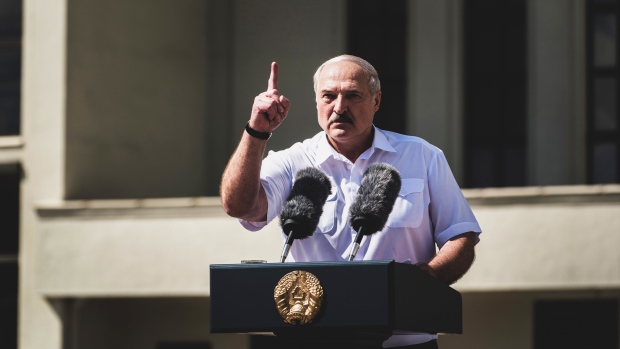 Alexander Lukashenko, Belarus’s president, gestures while giving a speech during a rally of his supporters in Independence Square in Minsk, Belarus, on Sunday, Aug. 16, 2020. , Bloomberg

(Bloomberg) -- Belarusian President Alexander Lukashenko may retain a top job for the rest of his life under a new constitution draft that would also seek to prevent the opposition from ever taking power.

“After the last year, we have realized that they can’t be allowed to take power,” Lukashenko said of his opponents at a session with officials discussing the new draft, which could be approved in a referendum by February.

If approved, the revised basic law would create a new assembly with sweeping powers and permanent seats for current and former presidents. Lukashenko, 67, said he might head the new body.

The former collective-farm boss has ruled Belarus since 1994 and has cracked down harder than before on critics since hundreds of thousands of citizens took to the streets last year to protest his re-election. In the face of U.S. and European sanctions, Lukashenko has increased reliance on Russia, his main ally.