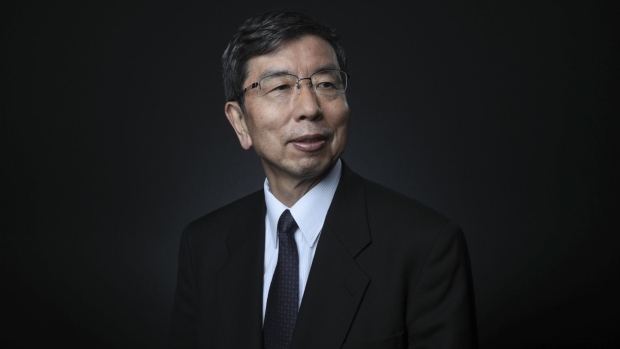 (Bloomberg) -- The Bank of Japan should review its policy with gradual adjustments in mind once the new leadership team is formed next spring, according to Takehiko Nakao, one contender to replace Governor Haruhiko Kuroda.

After a decade of ultra-loose monetary policy, there’s been a build up of side effects including damage to the nation’s fiscal discipline, less active banks, and a much cheaper yen that may warrant a deeper look, he said.

“They should review the side effects and the possible change of policy framework once the leadership is changed,” Nakao said in an interview Wednesday. The review could be made public or held internally, and any changes in coming years will need to be gradual to avoid major shocks, he added.

The comments come amid growing speculation that the central bank will conduct a policy review as it transitions to a new leadership. Kuroda is due to step down in April and two deputy governor positions are also up for grabs.

Last week BOJ board member Naoki Tamura further fueled the speculation by calling for a review and hinting that it may come as early as next year. Following the remarks, Kuroda and board member Toyoaki Nakamura said it’s too early to conduct a review now.

For more: Listen to this week’s Stephanomics podcast

Nakao and Kuroda have a lot in common in their career paths, as both worked as the nation’s top currency official at the finance ministry and led the Asian Development Bank. But Nakao’s current stance differs from Kuroda’s over the mounting side effects of current policy on markets, the country’s finances and the yen.

Kuroda has insisted the bank must stick to its current policy framework until wages rise more to keep price growth sustainable. Nakao said inflation remains moderate outside the impact of higher commodity and energy prices while wage gains are still lacking strength, a situation that sets Japan apart from the rest of the world.

Nakao said the BOJ’s tight control over government bond yields has hurt the debt market’s functionality and the profitability of banks. It’s also led to “de facto fiscal finance,” making the government heavily dependent on cheap borrowing costs to support the economy at the expense of fiscal discipline, he said. That’s a worrisome development given the nation’s ballooning debt burden, he added.

“We can’t postpone the change of policy forever. That is clear,” said Nakao, who now works at Mizuho Research & Technologies. “We should start rethinking about this mix of inflation target, yield curve control, massive purchases of assets and the future commitment.”

Someone from inside the BOJ who thoroughly understands the current policy setup should succeed Kuroda when his term expires, as any policy shift will be challenging, Nakao said.

Nakao is one of the names floated by economists to lead the BOJ after Kuroda, but most of them see current Deputy Governor Masayoshi Amamiya and former deputy Hiroshi Nakaso as the top contenders.

Whatever happens, an exit will be a painful task for anybody, Nakao said.

“It will affect the housing loans, and also government finance and pension management,” the 66-year old said. “It’s not really favorable. But we cannot continue this dormant kind of thing forever.”

While Nakao said he doesn’t have a clear idea himself about what the next step should be for the new leadership, he suggested the central bank could conduct a review internally without a prior announcement.

“By making it open, it would invite some kind of market volatility,” Nakao said. “I don’t know whether it should be open or not. But I think they should start thinking about the review of the effect of the policy, this framework, and also the side effect, and how they can change it.”