Sales of new condominiums in the Greater Toronto Area (GTA) hit a record for the third-quarter as buyers continue to flock back to the high-rise segment of the housing market.

The latest data from market research firm Urbanation show 7,773 new condo units were purchased in the GTA in the three-month period, up 22 per cent compared to the same time last year, marking a new all-time high for the third quarter.

According to Urbanation, the suburbs accounted for more than half of the total sales, but the City of Toronto saw stronger overall sales growth at 40 per cent.

Unsold inventory also fell, helping to push the average price per square foot for new condos still on the market up 10 per cent to $1,231 – another record high.

“With inventories declining further in Q3, this momentum is likely to sustain in the coming months, although high prices and greater prospects for interest rate increases may eventually start to weigh on demand,” said Shaun Hildebrand, president of Urbanation, in a release Monday.

The Greater Toronto condo market is firmly back in growth mode after a flood of units hit the market in the fall and winter months this past year as the pandemic-induced remote work shift led to a preference among many buyers for more living space, which pressured condo prices. 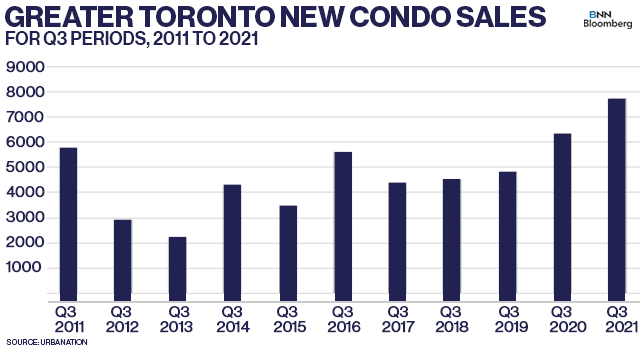 Jason Mercer, chief market analyst at the Toronto Regional Real Estate Board noted the “dichotomy” that occurred between the detached and condo segments of the housing market in a news release from December 2020.

“The supply of single-family homes remained constrained resulting in strong competition between buyers and double-digit price increases. In contrast, growth in condo listings far-outstripped growth in sales. Increased choice for condo buyers ultimately led to more bargaining power and a year-over-year dip in average condo selling prices during the last few months of the year,” he said in the release.

Since then, much of the uncertainty about how the pandemic would unfold has faded, leading to a rebound in the condo market.