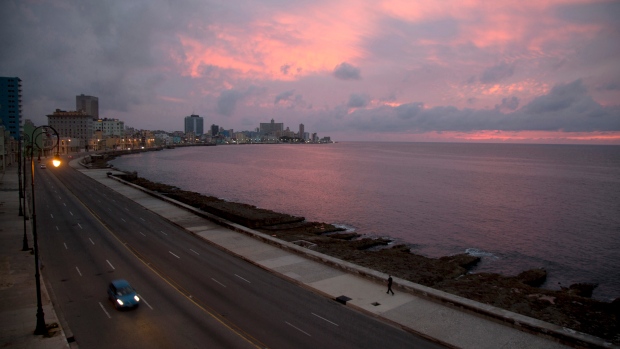 The Malecon waterfront is devoid of people during a lockdown to curb the spread of COVID-19 in Havana, Cuba, Thursday, June 18, 2020. With coronavirus cases down to a handful a day, Cuba is betting on a new form of tourism by designating five keys off its coast as all-inclusive vacation sites almost completely isolated from the rest of Cuba, in an attempt to restart a vital industry without reintroducing the virus to the country. AP Photo/Ismael Francisco

HAVANA -- With the coronavirus waning in Cuba, the government plans to restart its tourism industry by sending visitors to five narrow islands that will offer all-inclusive vacations and keep foreigners isolated from the rest of the nation.

The state-run system scheduled to debut Wednesday is designed to reopen a vital source of economic activity without reintroducing the virus to the country of 11 million people, where new cases have dwindled to just a handful a day.

Tourists will take charter flights to the islands or to central Cuba, where they will take tests to detect the virus. Those who are negative will proceed straight to their hotels or get on a bus going directly through mainland Cuba to one of the low-lying, sandy keys that are connected to the northern coast by bridges or ferries, according to recent government statements.

Anyone who tests positive will be “isolated,” presumably some combination of being quarantined and sent back home, though the details remain unclear.

Many other Caribbean islands are reopening to tourists and imposing testing on new arrivals. But none has adopted a plan like Cuba's that separates tourists almost entirely from the general population.

Tourist buses to the resorts will be prohibited from making stops along the way, and police officers will be assigned to each bus to enforce the rule. Visitors will not be allowed to rent cars or take trips outside the fenced-in coastal resort areas.

There is no indication that tourists will immediately start to arrive. Canada, Cuba's biggest source of visitors, remains closed to nonessential travel until further notice. European countries also have strict travel rules in place.

Like other Caribbean islands, Cuba is highly dependent on tourism. It earned an estimated US$4.1 billion from 4.2 million tourist visits last year, around 10 per cent of gross domestic product, although the island's finances are highly opaque due to government secrecy and an unusual system of two currencies, neither of which holds value outside Cuba.

After years of almost zero growth, the shutdown of international flights in March pushed Cuba into its most severe shortages and economic stagnation in many years, with long lines forming for basic products. A report from the Economic Commission on Latin America predicted a three per cent to five per cent drop in GDP for Cuba this year after years of stagnant growth that rarely topped one per cent.

Commerce, transportation and public spaces have been shut down almost completely for three months. The shutdown, combined with health monitoring and virus testing, has virtually eliminated COVID-19 in Cuba. With more than 2,000 tests performed daily, the number of new cases emerging each day has been fewer than 10, and often less than five, for several weeks.

The new tourism model is somewhat reminiscent of past practices. Under longtime leader Fidel Castro, Cubans were prohibited from entering tourist hotels as part of a broader pattern of isolating the communist society from outside influence.

Even before the coronavirus, some coastal resort keys were off limits to Cubans. The prohibition is now expanding to its greatest extent since Castro's brother Raul took over and dropped many restrictions.

Cuban hotel employees on the newly restricted keys will observe seven-day workweeks followed by seven days of isolation at home.

Varadero, a popular, resort-studded peninsula less than a two-hour drive from Havana, will be divided into a section for Cubans and a section for international tourists, who will not mix with the general population, officials have said.

The new measures are part of the first phase of a three-phase plan to move Cuba back to normal life, with phase three looking much like Cuba did before the virus. Cuba detected its first infections in a group of Italian tourists in the city of Trinidad in March.

All of Cuba has moved to phase one with the exception of Havana, the capital of two million people where the new infections have been concentrated.

Cuban tourism expert Jose Luis Perello said the July 1 date to begin the new system was “a sign of intent,” on the part of Cuban authorities to show that the island was open again, “but first you need to know who's really ready to engage in tourism this year.”

U.S. rules prohibit American visitors from trips that would be strictly tourism, like those to coastal beach resorts.

The foreign hospitality companies that manage most of Cuba's better hotels say they are hopeful that tourists will return to destinations like Havana in the latter stages of reopening. Cuba has said that more tourism will resume by phase three, albeit with near-universal mask wearing, social distancing and tests for arriving travellers.

“The island is coming out of the pandemic experience stronger, from a public-health standpoint,” said Juan Francisco Candeal, manager of the NH Capri Hotel. “I think that the message that's been transmitted is of a secure destination.”