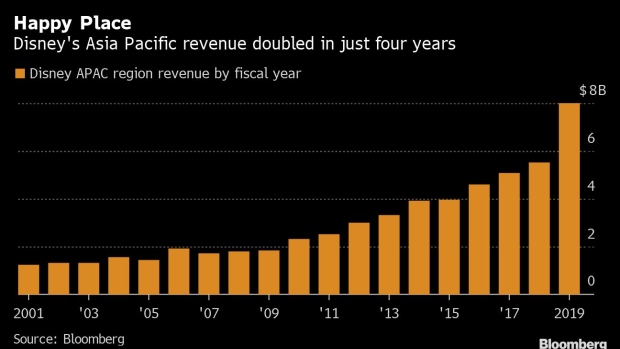 (Bloomberg) -- Walt Disney Co. Chief Executive Officer Bob Chapek is taking the helm at a perilous time for the company in China.

The deadly coronavirus outbreak has forced Disney to temporarily shut its Shanghai and Hong Kong theme parks, while cinemas across the mainland remain closed, raising the likelihood of postponing planned film debuts in the country. Infections are spreading worldwide, while the disease has killed more than 2,700 people.

Chapek, 60, who led Disney’s theme parks and consumer products businesses, is taking over immediately, the company said Tuesday, after Bob Iger abruptly stepped down as CEO. Even as coronavirus cases spike outside China, the biggest impact for Disney so far has been in the Asian nation, one of the entertainment giant’s fastest growing markets.

Disney’s theme parks in Hong Kong and Shanghai have been closed since late January, and the company said earlier this month that the shutdowns would cut revenue by about $175 million in the current quarter. In a Bloomberg Television interview Tuesday, Chapek was optimistic about recovering from the damage caused by the outbreak.

“When you have a brand as strong as us with tremendous franchises and built-in consumer demand, we know that when we are able to re-open, we will come back better and stronger than ever,” Chapek said.

Iger handed Chapek the job of parks chief five years ago, a role that Disney’s now former CEO has long deemed crucial because it represents daily interaction with fans around the world.

Chapek supervised the launch of the $5.5 billion Disney Shanghai resort in 2016.

As of Feb. 26, there was no announced date for reopening the Shanghai and Hong Kong parks, according to their websites.

Getting a sense of the impact on Disney of the park closures is difficult given we don’t know when they’ll reopen, said Zhang Heng, a media analyst at Guosen Securities Co. in Shanghai.

To contact the editors responsible for this story: Sam Nagarajan at samnagarajan@bloomberg.net, Dave McCombs