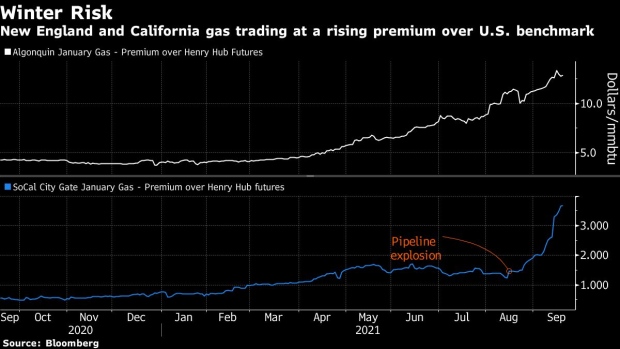 (Bloomberg) -- Natural gas futures have been soaring, and they’re set to get especially high in New England and California in the coming months.

U.S. inventories are tight, to the point where a harsh winter could mean a supply crunch. Any shortages would have an outsized impact on New England, where limited pipeline capacity makes it harder to bring gas from Appalachia.

Looking at gas for January delivery at the Algonquin City Gate, which includes Boston, the premium compared to benchmark Henry Hub futures has more than doubled from last year to about $13 per million British thermal units.

The region also relies on imports of liquefied natural gas cargoes during the cold season, making it more exposed to international prices at a time when Europe and Asia are scrambling for supplies.

California is in a similar position. Winter gas prices are surging there because of a deadly August explosion along one of Kinder Morgan Inc.’s pipelines in Arizona, which led to a reduction in supplies from the Permian basin. Traders are betting that restrictions on the system will persist for months.

The premium of January gas at California’s SoCal City Gate over benchmark futures is four times higher than a year ago.

In the spot markets, natural gas is also being sold at premiums in the Northeast and Southern California. Gas for next-day delivery on the Algonquin hub is trading 5 cents higher than Henry Hub spot prices, while gas sold on SoCal City Gate and the Ehrenberg hub are $2 higher.

U.S. gas futures are at a seven year peak on the New York Mercantile Exchange. Gas storage is 7.1% below the average for the past five years amid booming demand and stagnant production, according to latest data from the U.S. Energy Information Administration.